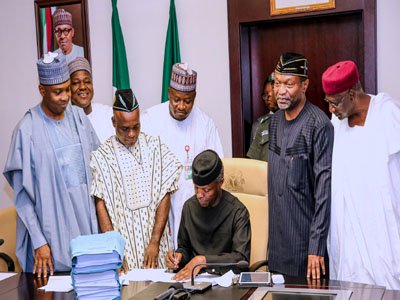 Text of Acting President Yemi Osinbajo’s remarks after signing the N7.44 trillion 2017 Appropriation Bill into Law at the Presidential Villa in Abuja yesterday.

A few minutes ago, I signed the 2017 Appropriations Bill into Law. This is an important milestone in our Economic Recovery and Growth Plan (ERGP) laid in April by President Muhammadu Buhari.

I would like to express my appreciation to the Senate President, the Speaker of the House of Representatives, as well as the entire leadership and members of the National Assembly for completing work on the 2017 Appropriation Bill. And I will return to this point presently.

The process of preparing and processing this bill was much smoother than the 2016 Appropriation Bill. On the executive side, there were no allegations of errors, or mistakes, and there was a significant improvement in the quality of the preparation, as well as the presentation.

I wish to commend the Ministry of Budget and Planning for such a remarkable improvement over a single budget cycle.

On the side of the National Assembly, I wish to commend the collaborative spirit of the engagements our Ministries, Departments and Agencies (MDAs) had with their various committees, and with the leadership, during the budget defence sessions. There were far fewer reported cases of acrimony, or hostile wrangling this year, than in the past.

From the reports we received, the sessions were generally conducted in a friendly atmosphere. There is no doubt that our democracy is maturing.

However, the final presentation and the signing of the budget have been considerably delayed. This was largely due to disagreements we had about the changes introduced to our 2017 Budget proposals by the National Assembly.

The executive took the view that the changes fundamentally affected some of our priority programmes and would make implementation extremely difficult and in some cases impossible.

I must say that the entire leadership of the National Assembly, led by the Senate President and the Speaker, adopted a commendably patriotic and statesmanlike approach to our engagements on resolving these critical issues.

In sum, the engagements yielded acceptable results. The most important being that the leadership of the National Assembly has given us a commitment that the National Assembly will re-instate the budgetary allocations for all the important executive projects, such as the railway standard gauge projects, the Mambilla Power Project, the Second Niger Bridge, the Lagos–Ibadan Expressway, among others, which they had reduced to fund some of the new projects they introduced.

This re-instatement will be by way of an application for virement by the Executive which they have agreed will be expeditiously considered and approved by the National Assembly.

It is as a result of that understanding and the outcome of our detailed engagements that we feel able to sign the 2017 Appropriations Bill into law today.

I am also pleased to mention that, in our discussions with the leadership of the National Assembly, we have jointly resolved to return to a predictable January to December fiscal year.

It is a particularly important development because this accords with the financial year of most private sector companies, underscoring the crucial relationship between government and the private sector.

It is designed to bring the Nigerian economy out of recession unto a path of sustainable and inclusive growth. The budget has a revenue projection of N5.08 trillion and an aggregate expenditure of N7.44 trillion. The projected fiscal deficit of N2.36 trillion is to be financed largely by borrowing.

Let me assure those who have expressed concern about the growing public debt that we are taking several actions to grow government revenues as well as plug revenue leakages. This is because, notwithstanding the fact that our borrowings are still within sustainability limits, we are determined, in the medium term, to reduce our reliance on borrowings to finance our expenditures.

Details of the budget, as approved by the National Assembly, will be made available by the Budget and National Planning Minister.

As you are all aware, our economy is already signaling a gradual recovery as growth is headed towards positive territory. First quarter GDP, at -0.52 per cent compares favourably with -2.06 per cent in the first quarter of 2016.

We are also gradually instilling confidence in our exchange rate regime. This improvement in GDP growth and other macro-economic indicators is largely attributable to our strategic implementation of the 2016 Budget as well as stronger macroeconomic management and policy coordination.

I am confident that the 2017 Budget will deliver positive economic growth and prosperity – one that is self-sustaining and inclusive. In this regard, the 2017 budget will be implemented in line with our ERGP.

Over the 2017-2020 plan period, we are focusing on five key execution priorities, namely:

The 2017 Budget includes provisions that reflect these priorities.

To demonstrate our commitment to following through our ERGP, the 2017 Budget allocates over N2 trillion to capital expenditure, principally infrastructure.

For instance, we are committing over N200 billion to improve transport infrastructure such as roads and rail; over N500 billion for investments in works, power, and housing; and N46 billion for Special Economic Zone Projects to be set up in each geopolitical zone.

The signing of the budget today will trigger activities in the domestic economy which will lead to job creation and more opportunities for employment, especially for our youth. And, as I indicated earlier, we will be returning to the National Assembly to seek upward adjustments by way of virements in relation to a number of critical projects which have received inadequate provision in the budget just passed by the National Assembly.

We acknowledge that government alone cannot achieve the overarching goal of delivering inclusive growth; that is why the 2017 Budget provides a lot of opportunities for partnerships with the private sector.

To help the private sector thrive, we are determined to create an enabling business environment. We are already recording verifiable progress across several areas ranging from a new Visa-on-Arrival scheme to reforms at our ports and regulatory agencies.

Pursuant to our commitments to the Open Government Partnership, we recently issued an Executive Order that will promote budget transparency, accountability and efficiency. We want to make the Federal budget work more efficiently for the people.

Thus, beyond the huge provisions for investments in critical infrastructure, we have mandated government agencies to spend more of their budgets on locally produced goods. This will open more opportunities for job creation with benefits for government in form of tax revenues.

We are also working hard to improve our revenue collection efficiency so that we can achieve our revenue projections. While we are deploying technological tools to enhance collections, the implementation of the Treasury Single Account (TSA) will continue to contribute significantly to improving transparency and accountability over government revenues.

Our fight against corruption is yielding positive results. Some of the recoveries are included in the 2017 Budget which will be expended on identifiable capital projects.

Already, we are beginning to see some improvement in the quality of public expenditure. This is great motivation for us to remain resolute in our fight against corruption so that economic prosperity is enjoyed by all Nigerians.

Let me reiterate that the implementation of our 2017 Budget will bring added impetus to our ongoing economic recovery. We will intensify our economic diversification efforts in our bid to expand opportunities for wealth creation and employment, thereby creating inclusive and sustainable growth.

Our path to progress and abundance is clear. The tools are in place and the resilient, resourceful and hardworking Nigerian people are set to go. I have no doubt that by the grace of God, the bleakness of recession is about to witness the uplifting dawn of abundance.

Share
Previous June 12: Opadokun, Others Know Abiola’s Killers, Says Al-Mustapha
Next Why We Raided Head office of The Sun -EFCC