Breaking News
Home / News / I won’t Apologise to the Senate…..I Have Done No Wrong — Ndume 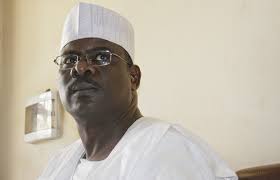 I won’t Apologise to the Senate…..I Have Done No Wrong — Ndume

Suspended  Senate Leader, Senator Ali Ndume, representing Borno south, has said calls for him to apologise to the Senate were misplaced because he did nothing wrong to necessitate an apology.

Ndume said this while fielding questions from reporters after he hosted the leaders and representatives of over 20,000 Internally Displaced Persons from Borno-South currently residing in 12 camps spread across the Federal Capital Territory, Abuja, on Saturday.
The legislator is currently serving 180-day suspension slammed on him by the Senate for allegedly impugning on the characters of senators Bukola Saraki (President of the Senate) and Dino Melaye, as well as allegedly exposing the upper legislative chamber to public opprobrium.

Following his suspension, Melaye urged Ndume to apologise to the senate to reduce or reverse his punishment.

But Ndume says it is not an option.

“The move for apology was made but I did not do any thing to warrant an apology. I have no problem with apology but you have to apologise for something you did,” he said.

“I did not do any thing so there is no basis for me to tender any apology.”

Ndume also said that the resolution to investigate the issues was not his but a senate resolution.

“The whole thing will come and go. It will pass away. It is part of the challenge a politician go through,” he said.

“My challenge in the senate now is temporary. It should not stop me from doing what I have been doing for my constituents. It is very temporary.

“I take my suspension in good faith. It will pass away. I am lucky to be in the Senate. Right now I am going through industrial attachment because one day I will leave the Senate. I don’t expect to die in the Senate,” he said.

He explained that while he had no problem tendering an apology whenever he offended people, there was no justification for him to offer an apology when he had not committed an offence.

According to him, what he did in the Senate was to draw the attention of his colleagues to the issues being raised about the two senators in the media.

This, he said, led to the decision by the entire Senate to investigate and put the matter to rest.