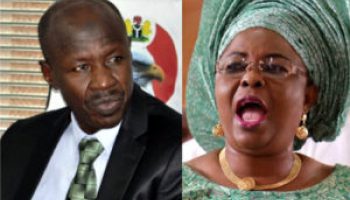 Another multi-billion naira property has been traced to a former First Lady, Mrs. Patience Jonathan.

The Economic and Financial Crimes Commission (EFCC) is to mark the property as “being under investigation” and may place it under Interim Asset Forfeiture, The Nation learnt yesterday.

The relationship between Mrs. Jonathan and two companies was being probed by detectives as at press time.

Also, three accounts and three more properties have been put under surveillance by the anti-graft commission in connection with the ongoing investigation of the ex-First Lady.

The accounts were uncovered in the course of investigating the ex-First Lady and Aribawa Aruera Research Foundation, The Nation learnt from sources close to the investigation..

EFCC investigators have however only established a link between Mrs. Jonathan and Aribawa Aruera Research Foundation.

The anti-graft commission is suspecting a business relationship between Mrs. Jonathan and Finchley Top Homes Limited and AM-PM Network Limited.

Preliminary investigation revealed that huge slush funds might have been laundered through the foundation and the two firms.

A report indicated that Aruera Foundation is registered with the Corporate Affairs Commission (CAC) with RC No 22805.

It said: “Huge funds were suspected to have been laundered into the accounts of the above mentioned companies and properties worth billions of naira were allegedly acquired by ex-First Lady Patience Jonathan through the aforementioned companies.

“The ex-First Lady and five others are trustees of Aribawa Foundation. Intelligence from Abuja Geographical Information Service (AGIS) revealed that a multi-billion naira property, Plot No. 1758B06 in Mabushi Area, belongs to the foundation.

“The said property is not such that a state Permanent Secretary in person of Mrs. Patience Jonathan can afford.

“The property should be marked as under investigation and interim forfeiture order be secured.”

Besides, EFCC detectives have turned their searchlight on the ex-First Lady’s relationship with Finchley Top Homes Limited and AM-PM Network Limited.

Another source added: “We have conducted searches at the Corporate Affairs Commission (CAC) on the two companies whose accounts were earlier frozen alongside that of the ex-First Lady over $5.8 million which was reasonably suspected to be proceeds of crime.

“They were among the five companies and one Esther Oba said to be having a total sum of N7.4 billion in six banks.

“But their counsel Ifedayo Adedipe (SAN) succeeded in unfreezing the account on April 6 at the Federal High Court presided over by Justice Mojisola Olatoregun.

“This is a new investigation. It is too early to return any verdict on the two companies because our detectives are looking into their books.”

The source cited Section 7 of the EFCC (Establishment) Act to justify the investigation.

Section 7 of the EFCC Act says: “The commission has power to (a) cause any investigations to be conducted as to whether any person, corporate body or organization has committed any offence under this Act or other law relating to economic and financial crimes.

“(b) Cause investigations to be conducted into the properties of any person if it appears to the commission that the person’s lifestyle and extent of the properties are not justified by his source of income.”

The latest probe of Mrs. Jonathan has raised the number of properties linked to her to 17.

About 13 properties were initially associated with the ex-First Lady in Port Harcourt and Yenagoa.