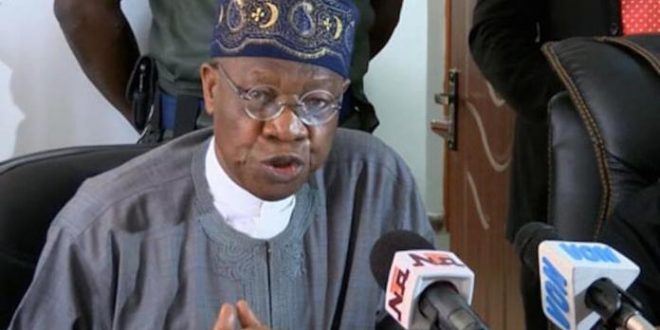 June 5, 2017 Comments Off on FG Vows To Punish People Behind Fake News 15 Views

The federal government has expressed concern over rising the spate of fake news in the public space saying the development is a threat to the nations unity..

Reacting to the false news of bomb blasts in Abuja and Lagos, which were widely circulated in the past few days, the Minister of Information and Culture, Mr Lai Mohammed, said the Federal Government will expose those behind fake news and bring them to justice.

In a statement by his Special Adviser, Mr Segun Adeyemi,  urged Nigerians to be extra vigilant in view of the worsening scenarios of fake news being peddled by unscrupulous persons, who are bent on destabilizing the polity and causing disunity between the country’s various ethnic and religious groups.
Mohammed referenced a gory video of a blast that occurred many years ago which he said was being circulated along with the false news of a bomb blast in Abuja, while news of a non-existent bomb blast in Lagos was also widely circulated, forcing the police to promptly debunk the fake news.

The minister said the latest strategy being employed by the purveyors of fake news was to attribute the sources to top government officials improbable statements that are capable of destabilising the polity, causing tension and threatening the country’s unity.

‘’This is why we are appealing to Nigerians not to ever engage in knee-jerk reaction to any news, and to subject every information to a very serious scrutiny by checking with security agencies and government spokespersons,’’ he said.

He described the fake news phenomenon as ‘the scourge of our times’ which will probably get worse in the months ahead, hence the need for all Nigerians to be very vigilant so that fake news purveyors do not succeed in their quest to sow the seeds of chaos and confusion.

He also appealed to the traditional media, which has a reputation to protect, to join the campaign against the purveyors of fake news, especially because the websites of many reputable media organisations are being parodied and used to spread false information in order to gain some modicum of credibility.

‘’On our part, we will not relent until we have exposed those who are behind this fake news phenomenon and brought them to justice,’’ he said.