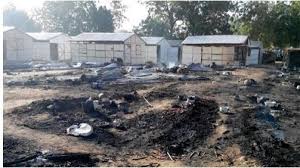 June 3, 2017 Comments Off on 21 killed As Boko Haram Sacks Villages Near Chibok 15 Views

At least 21 persons have been reportedly killed in two separate Boko Haram attacks in villages near Chibok in Borno state.

According to a resident,  the  group carried out the attack on lastweek Sunday and Wednesday.

He said the insurgents first struck at Kaya, a village 27 km from Chibok and the second attack came 72 hours later when the terrorists attacked the next village close to Gumsri .

He said  that residents had now deserted their homes.

“There is no single soul remaining there (kaya)… The Boko Haram members came in the evening with their motorcycles, bicycles and started firing at everyone in sight,” he said.

“They burnt many houses. Those who were fortunate ran away, but those who couldn’t escape were attacked. All the villagers have moved out of the village.

“People did not hear about the killings because the village is not accessible. It is located inside the bush.”

Hassan said two days after the incident, the attackers returned to a village close to Gumsri, a Borno community, where 14 persons were allegedly killed.

“Within two days, they returned and attacked the next village close to Gumsri which acts as kind of roadblock between us and Boko Haram,” he said.

“As it is all the villagers in those communities have deserted, they have packed their belongings and come to Chibok. So many attacks and innocent lives have been lost in Damboa LGA but it is usually not reported.

“To us here in Chibok, we are living in fear because that it is the only place that has been like a roadblock to them coming to us. Some people that cannot withstand the situation are even moving to Maiduguri which is safe for them.”

On whether there are no soldiers on ground during the attacks, he said the soldiers around find it difficult to get to the place of the attacks “because of the far distance from where they are to the village.”

“Even with the presence of a brigade, the problem the security people are having here is that mostly, the communities attacked are under Damboa council but the soldiers are closer to Chibok,” he said.