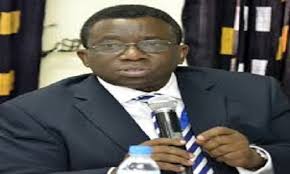 June 2, 2017 Comments Off on Ban on Cigarette Sale To Underaged In Nigeria Underway …As The World Commemorates World No Tobacco Day 18 Views

Health Minister, Professor Isaac Adewole has announced the Federal Government’s a ban on all forms of advertising and sale of cigarettes to anyone below the age of 18 years. Professor Adewole made the announcement during a press briefing in Abuja to commemorate the World No Tobacco Day 2017 which has as theme – Tobacco a threat to Development.

The minister said the decision to press ahead with the new arrangements was in line with provisions of the National Tobacco Control (NTC) Act which is still waiting for implementing regulations and guidelines.

Earlier in Abuja, a cross-section of civil society and public health groups urged the Nigerian government to ensure regulations for implementation of the NTC Act are put in place to save the nation from tobacco deaths.

Hilda Ochefu, the sub-regional coordinator, West Africa of CTFK explained the link between tobacco and poverty, noting that the World Health Organisation (WHO) specifically tied the attainment of the Strategic Development Goals 2030 to tobacco control policies as tobacco is now viewed as a threat to everyone.

Deputy Executive Director of ERA/FoEN, Akinbode Oluwafemi, in his intervention explained that aside from the renewed onslaught on Nigerian youth through very attractive and flavored cigarettes, tobacco industry front groups such as the Initiative for Public Policy Analysis (IPPA) have continued to spin lies to discredit tobacco control and public health advocates.

Oluwafemi said that the IPPA was behind the attempts to discredit members of the National Tobacco Control Committee (NATOCC) which is an advisory body to the health minister on how to implement the NTC Act, even as he revealed that the Board of IPPA is peopled by individuals with remote links to the tobacco industry.

He alerted that even as the WHO targets driving its health agenda through the SDGs, the tobacco industry has also perfected a plan of driving a wedge into the system to undermine it with alleged membership of British American Tobacco Nigeria (BATN) in the private sector support group of the SDGs.

Dr. Akin Adebiyi capped the discussions by warning on the health impacts of smoking which include heart diseases, lung diseases, various cancers and sure death.

Some of the demands of the groups are: