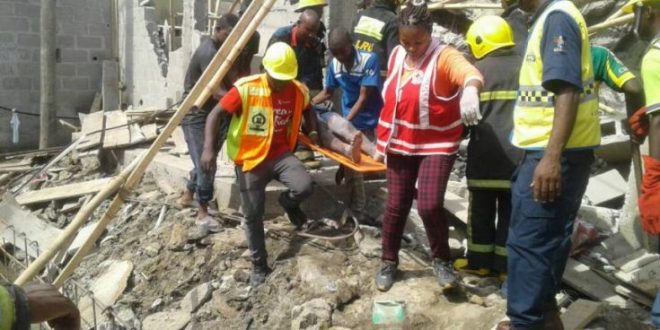 May 30, 2017 Comments Off on Five year old killed and others injured as Lagos building collapses 26 Views

There was tragedy on  Monday after a foreman and a five-year-old girl lost their lives in a  three-storeyed building collapse under renovation on Daddy Alaja Street, Oke Arin, Idumota,   Lagos Island.

Fourteen others were said to have sustained varying degrees of injury in the incident which occurred around 7am.

It was gathered that the landlord had asked the occupants to vacate the building pending when it would be renovated.

He was said to have given the job to a contractor, who allegedly advised him to pull down the structure due to its poor condition.

However, the landlord allegedly declined the advice and insisted on a renovation.

Some of the tenants, including a family of four, were said to have refused to vacate the building, just as some of the workers started living in it.

The building came down on Monday, trapping many of the occupants.

The area was cordoned off as a crowd of sympathisers besieged the house.

A resident involved in the rescue efforts, Ali Baba, said the noise of the collapse jolted neighbours, adding that they later rushed to the scene to save some of the victims.

He said, “Around past 7am, we heard a loud noise and we all ran to safety. We later discovered that it was a building that collapsed.

“We brought out 10 people from the rubble, but two died. Those that died were the man in charge of the bricklayers (foreman), who we call Baba Ibeji.

“The second was a five-year-old girl, Farida. She had gone to the toilet when the pillars fell on her and she could not wriggle her way out. Her father, mother, elder brother and the family’s housemaid, were rescued with some injuries.”

A disc jockey, Okunola Olayinka, said he lost equipment worth over N3m to the incident, adding that he acquired the instruments in the 10 years of his career.

Olayinka explained that the owner of the house had stopped collecting rent about six years ago.

He said, “There was no breeze or anything that triggered the collapse; it just happened.

“It was a three-storeyed building with a penthouse. The building was under renovation. The landlord had passed information that everybody should vacate the building. But due to the situation of things in the country, some of us stayed behind. He is not even aware that people are living there. He stopped collecting rents since 2011. What happened was unfortunate.”

However, another resident, who spoke on condition of anonymity, said the tragedy could have been prevented if the landlord had listened to the contractor.

“The house was in a terrible condition when he asked the contractor to renovate it. The man advised the landlord that the house should be pulled down because it was beyond repair, but he insisted on the renovation.

“Most of those affected were bricklayers employed to work on the building. The foreman was among the dead,” he added.

The Acting General Manager of LASBCA, Oyewale Joseph, said the landlord, contractor and site engineer would be prosecuted over the incident

He noted that the agency had sealed off the building twice, but each time, the developer removed the seal and worked without any authorisation.

He said, “Preliminary investigation shows that the site is in a swampy place. It was a former refuse dump and the building had been sealed twice. First was last year and sometime this year. We also chased the occupants out last week when we got information that people were staying there.

“But unfortunately, we learnt that the developer made use of the weekend and the Democracy Day to renovate the structure. There is no document to show they had any permission before this ugly incident happened. We were able to remove 14 people from the rubble.”

The LASEMA General Manager, Mr. Adesina Tiamiyu, said 14 injured victims were treated and taken to a hospital, adding that the two corpses had been handed over to their family members for burial.

“Our investigation revealed that illegal activities of repairs were ongoing. Proper investigation will be carried out by the relevant government agencies to ascertain what led to the collapse of the building,” he added.

The Commissioner for Physical Planning and Urban Development, Wasiu Anifowoshe, said whistle blowing was the way out of the incessant building collapse in the state.

He said, “This is one out of several worrisome experiences we face every day on the job.

“We need information on such activities from responsible Lagosians so as to be able to curb the excesses of unscrupulous developers and owners of property in Lagos State.

“A distress call to 767 or 117 would have averted this ugly incident.”

Share
Previous Hope Is In the Horizon, Ojudu Assures Ekiti People
Next Gunmen shot dead a police sergent on duty 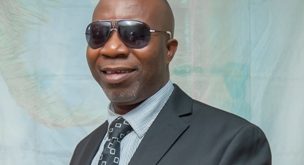