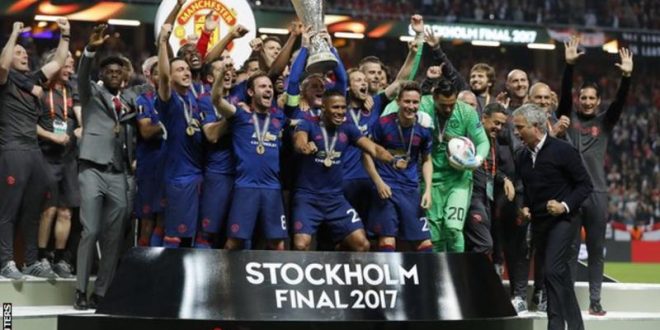 May 24, 2017 Comments Off on Man U win Europa league cup final and secure a place in champions league 107 Views

Manchester United claimed their second major trophy of the season and secured Champions League football as they overcame Ajax to win the Europa League final in Stockholm.

Paul Pogba’s deflected shot put them ahead in the 18th minute and Henrikh Mkhitaryan’s sixth Europa League goal of the campaign, flicked in from Marouane Fellaini’s header at a corner, confirmed they would add to the EFL Cup won against Southampton earlier this season.

Wayne Rooney made a brief appearance as a substitute with a minute left and the game won, being handed the captain’s armband by Antonio Valencia on what could well be his farewell appearance for United.

And as the final whistle sounded and United’s celebrations began, chants of “Manchester” rang around the Friends Arena in tribute to those who died and were injured in the attack which cast a shadow over this showpiece occasion.