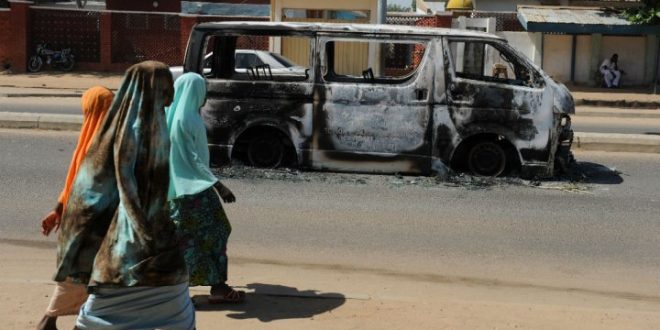 May 15, 2017 Comments Off on suspected suicide bomber recounts ordeal 12 Views

A 14-year-old female suspected suicide bomber has said Boko Haram leaders chose her to detonate an Improvised Explosive Device in Maiduguri, the Borno State capital, because she rejected the marriage proposals of their members in Sambisa Forest.

Also, the troops of the Nigerian Army, under Forward Operation Base, Fika, Yobe State, have arrested four suspected Boko Haram kidnappers in Mundu village in the Yuga area of the state.

It was learnt that the suspected Boko Haram members – 25-year-old Yahaya Auta; Salisu Lawal, 20; Umar Mohammed, 18; and Samaila Abubakar, whose age was not known – were apprehended after a tip-off and found to be in possession of several ammunition.

However, the girl suicide bomber was among three suspects arrested by the military when they allegedly came for a suicide mission at a military facility in Jakana in Maiduguri.

The suspect (name withheld because she is a minor) told the News Agency of Nigeria that she was sent on the mission to detonate the device because she refused marriage proposals from three Boko Haram terrorists.

The suspect said she was abducted with her father, Usman, by Boko Haram insurgents in Gwoza, Borno State, in 2013.

She stated that she and her father were running to Mandara Mountain for safety when they were abducted.

The teenager added, “I have spent three years in the hands of Boko Haram. Three different Boko Haram (terrorists) had proposed to marry me and I refused. Two among them were commanders (amir).

“When I refused for the third time, one of the commanders became furious and threatened to kill me and my father. I told him I would rather die than marry a Boko Haram (terrorist).

“So, after one week, they said since I have refused to get married, I should be taken to Maiduguri for a suicide mission. So, three of them held my hands and they injected me.

“Then, I never knew what was happening again.

“Ï was taken to a herbalist, who, after I regained consciousness, told me that I had  been with him for 30 days.

“He told me he was preparing me for a mission. So, he gave me some water to drink. I don’t know what it tasted like but I drank it. So, he said they would come and pick me today.

“At about 7pm, three Boko Haram (members) came with a male and a female. They were also recruited for the mission like me.

“We spent one and a half days on the road to Maiduguri. It was when we got to Maiduguri that they strapped the bombs to our bodies. At that moment, I knew that I was going to die; so I started crying.

”I was watching when the first bomber, a female, detonated her explosive close to a military checkpoint, which killed no one but herself. The second, a male, was killed by the military before he could detonate his.

“At that time, something told me to remove my own IED and surrender, which I did.  I was surrounded by soldiers and policemen and I fainted.

”When I woke up, I discovered that one of the policemen at the checkpoint was a brother of my mother. I think that was the reason I survived.”

Meanwhile, the Theatre Commander of Operation Lafiya Dole, Maj. Gen. Lucky Irabor, said the suspects were being de-radicalised at a military detention facility.

“We have quite a number of them here in our facility. We have been profiling them and making them feel comfortable.

“So far, from their testimonies, they usually tell us that they were brainwashed by some sort of charms to commit suicide,” Irabor said.

According to the army, the weapons recovered from the four Boko Haram kidnap gang are one locally-made six-loader single barrelled gun, one empty cartridge, two machetes, a knife, two mobile phones, two packets of Tramadol tablets and N360,000.

He said, “Troops deployed at Forward Operation Base, Yuga, on blocking position, on Sunday, following a tip-off from well-meaning individuals, ambushed and arrested four suspected kidnappers at Mundu village.

“Preliminary investigation shows that the suspect hails from Bulabulin village in the Fika LGA. He is being further interrogated.”