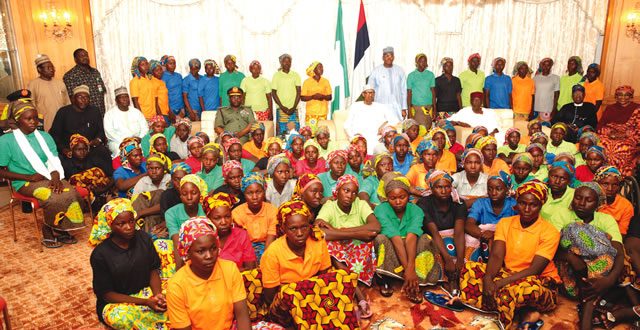 May 15, 2017 Comments Off on Newly released Chibok schoolgirls to re-unit with parents on friday says FG 9 Views

The Federal Government has invited parents of the 82 Chibok schoolgirls, who were released penultimate weekend by Boko Haram, to Abuja where they will be re-united with their daughters.

The Chairman, Chibok Community in Abuja, Mr. Hosea Tsambido, said this in an interview with one of our correspondents on Sunday.

Some Chibok representatives, who met with the Federal Government last week, were given photographs of the girls while the representatives handed over the pictures of the released girls to the parents in Chibok for identification.

It was learnt that the concerned parents had been able to identify the girls and were therefore asked to come to Abuja to meet the girls on Friday.

Tsambido stated, “Many of the parents have identified their children through the photos and I was told that they are coming on Friday.”

One of the guardians of the rescued girls, Yahi Dwata, also confirmed to that the Federal Government had asked the parents to come on Friday,

Dwata, whose niece, Comfort Bulus, is among the rescued girls, said, “It is true. I have received word from parents in Chibok that the government asked them to come on Friday. I will also be in Abuja on Friday.”

The Minister of Women Affairs, Aisha Alhassan, who is coordinating the rehabilitation of the Chibok girls, could not be reached on the telephone as she did not return calls to her telephone while she had yet to respond to a text message as of the time of filing this report.