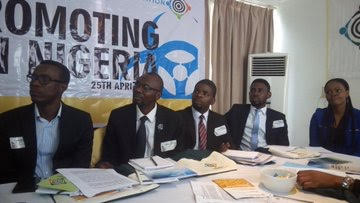 GMOs, BIOSAFETY AND THE LAW

The need for public consultation and participation in the approval processes of applications that directly affect the people’s health and wellbeing cannot be overstressed. Many issues surround the matter of our food and agricultural modern biotechnology that require clarifications and in-depth interrogations. It is to this end that the Health of Mother Earth Foundation (HOMEF) on the 25th of April 2017 had a roundtable with lawyers in Abuja to look critically at the Nigerian Biosafety Act and decide if it is capable of regulating and preserving human and environmental health in Nigeria or if it should be urgently reviewed or repealed.

The director of HOMEF, Nnimmo Bassey, in welcome words said that access to safe and nutritious food is a universal right and modern agricultural biotechnology challenges that right with its creation of novel organisms dependent on toxic chemicals and abridgement of the rights of farmers to preserve and share seeds. He regretted the fact in some countries citizens are conned into eating unwholesome foods, some of which are actually classified as pesticides due to non-labelling of genetically engineered crops

Gbadebo Rhodes-Vivour, a Public Policy Expert and the Convener of Nigerians against GMO, speaking at this event said the use of genetically modified organisms (GMOs) is not the solution to food and agricultural problems in Nigeria. He explained that crops which are produced by the manipulation of their genes at the micro level pose severe risks to the health of man and the environment, adding that the promoters of this technology are driven by profit and not public interest.

Science has been of great benefit to mankind throughout life but it must be carefully harnessed to ensure safety and wellness. This was the position taken by another speaker at this event, Dr Ify Aniebo, who is a molecular geneticist. She underscored the fact that science itself has limitations. She explained that the process of transferring genes from the DNA of one organism to that of another organism could result in the creation of novel proteins which have never been in the food supply and could create toxins and allergens in food.

She stressed that there have not been enough studies to prove that GMOs are safe for consumption and called on the Nigerian government to invest in strict and independent scientific research to check the health, ecological, socio-economic impact of GM crops to ensure the safety of our food systems.

According to Jackie Ikotuonye-Offiah, a botanist and a Country Representative of Bio-integrity and Natural Food Awareness Initiative, the idea behind modern agricultural biotechnology is that of seed colonization as none of the arguments about GM crops hold true. These crops are neither more nutritious nor are they more productive than organic and conventional crops. They do not reduce pesticide use but instead lead to use of more toxic pesticides that contaminate both soil and water systems. Cost of Seed in the US for example, where GM firms dominate the seed market increased dramatically compared with prices for non-GM and organic seeds.

She posited that the solution to food challenge is in agroecology and organic agriculture and suggested increased and focused support for small-scale human centric agriculture. She urged the government to provide local farmers with extension services, food processing facilities and infrastructure to be able to convey farm products to the markets in good time.

The last session for the day focused on the Nigerian Biosafety Management Act. Mariann Orovwuje who is a lawyer and an environmental, human and food rights advocate, spoke at on the concerns, risk assessment and permits of this Act. According to her, the law which was established in 2015 leaves gaps that can be easily manipulated to allow influx of GMOs without strict regulatory measures.
She explained that the Act does not ensure the implementation of the precautionary principle that places a demand on our government to decide against approval of GMOs especially in cases of incomplete or controversial knowledge. She also mentioned that the Act does not specify clearly how large-scale ﬁeld trials would be contained to avoid contamination of areas beyond the experimental fields. The lack of clear provisions for redress and strict liability was also flagged as well as the need for mandatory labeling of GMOs and derived products.

She queried the speed with which the Nigerian Biosafety Management Agency signed permits for field trials of Monsanto’s maize and cotton applications saying that the process was not transparent and did not take public concerns into consideration. The fact that the board of the governing board of the agency is populated with GMO was said to be a hotbed for conflict of interest in the application and approval processes.

Participants agreed that the Nigerian Biosafety Act in its present state is defective and cannot protect the interest of Nigerians in matters relating to food and thus must be reviewed. It was also concluded that the permits given to Monsanto should be revoked.

The legal practitioners agreed to form a technical committee to carry out research on the subject of GMOs from the legal perspective and to take necessary action towards ensuring that a suitable framework is in place to defend our agriculture and food systems and the ensure an unfettered enjoyment of safe and nutritious foods by all Nigerians.