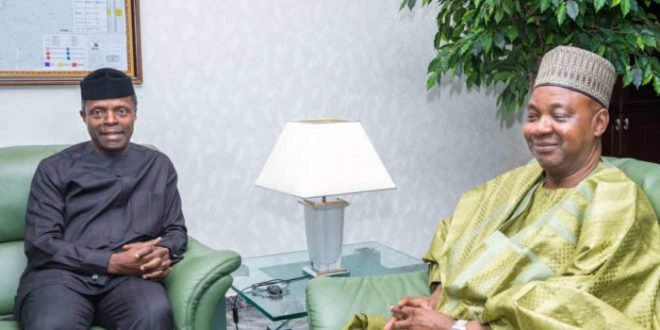 Reasons behind my visit to Osinbanjo- Ex-VP Sambo

May 11, 2017 Comments Off on Reasons behind my visit to Osinbanjo- Ex-VP Sambo 23 Views

Former Vice-President Namadi Sambo on Wednesday said his visit to the Acting President, Yemi Osinbajo, was a familiarisation one.

He described the meeting as a “usual” visit.

Sambo said this in a brief interview he had with State House correspondents shortly after meeting Osinbajo behind closed doors inside his office at the Presidential Villa, Abuja.

A member of the opposition Peoples Democratic Party, Sambo was deputy to former President Goodluck Jonathan who lost the 2015 presidential election to President Muhammadu Buhari.

He arrived at Osinbajo’s office at about 4pm shortly after the weekly Federal Executive Council meeting presided over by the Acting President.

Osinbajo stepped out of his office to personally receive his predecessor and ushered him into his office where they had a brief discussion behind closed doors.

One of the close aides of the former Vice-President however told our correspondent that there was nothing strange in the meeting of the two leaders who he described as friends.

He cited an example of the invitation extended to Sambo to attend the ninth annual Bola Tinubu Colloquium which was held on March 28 in Lagos.

The invitation signed on behalf of Osinbajo by the Deputy Chief of Staff to the President, Mr. Ade Ipaye, was dated March 20 and addressed to Sambo and his wife.

Ipaye noted in the letter that Osinbajo had been convening the colloquium in the last nine years to play a crucial role in strengthening “the process of national decision-making within the political and social spheres of Nigeria.”