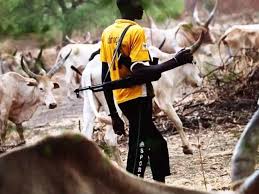 Four policemen were feared dead following attack by gunmen suspected to be Fulani herdsmen along the farmlands alleged to have been forcefully taken over by herdsmen in Abraka, Ethiope East Local Government Area of Delta State.

The incident occurred on Tuesday when the officers were returning from the site of the yet-to-be demarcated land in Eku and Oria communities when they were attacked by the herdsmen.

It was learnt that the herdsmen had used their cattle to block the police van before opening fire on them killing a police inspector on the spot.

Findings had it that another officer died on the way to the hospital where two other victims were being rushed for urgent medical attention on Tuesday night.

Local and security sources disclosed on Wednesday that the remaining two police victims died on Wednesday at an undisclosed hospital where they had been rushed to for treatment.

One of the survivors told our correspondent that, “The team and an executive member of the Umiaghwa-Abraka vigilante group were on their way back to the police station after assessing the Eku and Oria communities following a boundary dispute between a company operating in the area and the locals when they were ambushed.”

The lawmaker representing Ethiope East in the Delta State House of Assembly, Evance Ivwurie, described the attacks by the herdsmen as unwarranted.

He said, “We have been crying about this to the whole world, yet people felt we were just talking. Now, if they could kill armed policemen, what is the fate of my constituents?”

When contacted, the state Police Public Relations Officer, DSP Andrew Aniamaka, confirmed the attack on the policemen but clarified that only one inspector died.