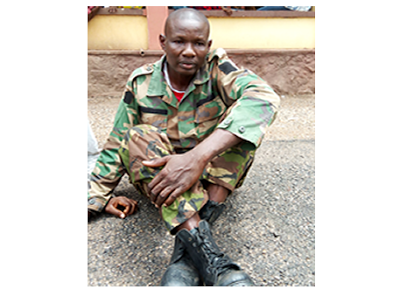 May 9, 2017 Comments Off on Fake soldier arrested in Ogun for alleged murder 81 Views

An Abeokuta-based auto dealer, Tunde Olatunbosun, has been arrested by the Ogun State Police Command for allegedly killing a motor boy, Razaq.

The suspect was among 10 suspects that were paraded by the Ogun State Commissioner of Police, Ahmed Iliyasu, at the command’s headquarters in Eleweran, Abeokuta, on Monday.

The suspects’ crimes ranged from armed robbery, murder to kidnapping and impersonation.

It was gathered that the killing of Rasak occurred on Saturday, April 27, 2017, at Alaja Car Wash in the Leme area of Abeokuta around 9.45am.

The auto dealer was said to have taken an unregistered Toyota Sienna to the car wash. He was about driving out after the car had been cleaned, when he saw that a truck was obstructing his car.

Olatunbosun, who allegedly wore a military camouflage knickers, had approached the motor boy inside the truck when an argument ensued.

It was learnt that the motor boy had told him that he was not the driver and that he would inform his master to remove the truck.

Iliyasu said 49-year-old Olatunbosun went back to his car and brought out one Avar Pump Action  gun and shot Razaq at a close range, killing him insantly.

Iliyasu further said after committing the crime, the suspect fled to the Republic of Togo.

The police commissioner said he gave his men and the Federal Special Anti-Robbery Squad an order to arrest him.

He said in less than four hours, the profile of the suspect was uncovered “through the use of technical intelligence and he was lured back to Nigeria (Abeokuta), where he was arrested. He was arrested on Thursday, May 4, 2017.”

Iliyasu said preliminary investigation revealed “that the suspect is a leader of bandits terrorising Abeokuta and its environs.”

The suspect, who is a father of three, According to  PUNCH report, it was gathered  that the victim was dragging the gun with him when the trigger went off.

He said, “I am a car dealer. I usually travelled to Republic of Benin and purchase tokunbo (used) cars for sale in Abeokuta. Many people know me because I had assisted them to buy cars.

“I was trained as a merchant naval officer at the disbanded academy in Iperu Remo. I got the camouflage knickers from the academy.

“I regret killing the boy; it was a mistake. The boy was struggling with me for the gun and in the process, it went off and killed him.”

Also paraded were a fake soldier, Olamilekan Ibrahim, and two others – Sunday Akpabio and Sunny Tijani – who were alleged to have extorted money from residents of the Ogere-Remo area.

Iliyasu said they were arrested on Saturday, May 6.

They denied being armed robbers, saying they were burglars, who had operated in Mowe, Ibafo, and Abeokuta, among other places.

Two other suspected armed robbers, Friday Ekepe and Friday Okeifi, were paraded. Iliyasu said the suspects specialised in snatching cars, and had snatched a Toyota Highlander from a woman at Ijebu Ife on Wednesday April 26.

Iliyasu warned that there would be no hiding place for criminals in the state, adding that “the command is sure of ridding the state of crime and criminality.”