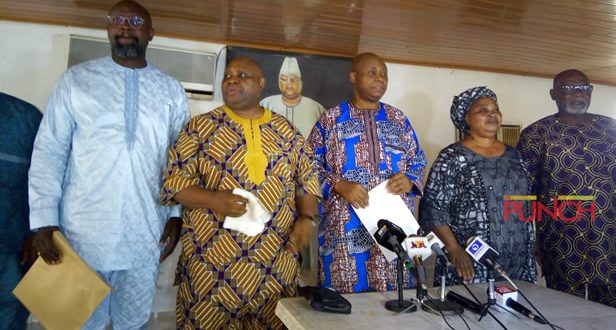 May 8, 2017 Comments Off on Adeleke’s family reject Aregbesola inquest into the late senator Isiaka’s death 27 Views

The late Senator Isiaka Adeleke family  has recently rejected the inquest ordered into the senator’s death by the Osun State Governor, Mr. Rauf Aregbsola, saying it is a plan to manipulate the cause of the death in order to establish what the government wants the people to hear

The immediate younger brother of the deceased, Dr. Deji Adeleke, said this in Ede on Sunday while reading the address of the family to react to the governor’s move to probe the death of the first civilian governor of the state.

Other siblings of the late senator present at the briefing are: Dele, Demola  and Mrs. Dupe Adeleke-Sani with her husband.

The family faulted the timing of the probe and warned the pathologist handling the autopsy ordered by the family against releasing the report to anybody apart from the Adeleke family.

He said, “The family hereby denounces in its entirety the ill-advised and self-serving coroner’s inquest ordered by the Osun State Government purportedly set up to determine the cause of death of our dearly beloved Senator Isiaka Adeleke.

“We condemn in strictest terms the continuous politicisation attempt by the state of this great loss to our family, particularly the ordering of this inquest at a time that we are still coming to terms with the harsh reality of his sudden departure and the pain and grief therefrom.

“As part of our attempts to reach closure and commence our healing process, the family had earlier ordered an autopsy to be carried out, this is the only scientific and globally accepted means of objectively determining the cause of death and we look forward to the reports therefrom, this is irrespective of the obvious infrastructural and technological limitations of medical laboratories in the country.

“We have been reliably informed by credible sources that the outcome of the ‘kangaroo inquest’  is already predetermined by the state government and designed to serve its own interest with distorted facts and misinformation which will clearly not be in the interest of the good people of Osun in general and the Adeleke family in particular.

“We have therefore as a family resolved not to participate nor cooperate with the kangaroo-styled panel set up by the state government, as the panel was clearly set up to serve the state’s own political interests and ultimate establishment of its own self-serving “ facts.” While everyone including any government is entitled to his own opinion, the government inquest is an attempt  to create its own “alternative facts.” Facts are sacred and the truth is constant, alternative facts are nothing but falsehood.

“We are therefore compelled to reject the inquest with its predetermined outcome. We also urge the people of Osun to discountenance this kangaroo inquest.

“We wish to reiterate in the strongest of terms that the report of the autopsy ordered by the family must be released to no one else other than the Adeleke family. Anything contrary to the conduct by the pathologists will be sanctioned by law.”

In his response, Aregbesola said the state government took the decision to probe the death not to please anyone but because it was the best thing to do.

The governor’s reaction was contained in a statement signed by his spokesperson, Mr. Semiu Okanlawon.

The statement read, “This is rather unfortunate. As a government the step that has been taken is the most responsible and the most acceptable standard in any civilised society.

“We are all bereaved and mourning with the unfortunate death of one of our illustrious sons and most importantly a former governor of our dear state.

“It would not be in the best interest and honour of the departed soul for the government to engage the family on a matter of this nature.

“It is therefore trite to state that the Adeleke Family has right to all the choices open to them just as we are sure this is a matter that is already in the court of public opinion.”

Adeleke died in early hours of Sunday, April 23 after he was said to have attended to guests till around 2am the same day.