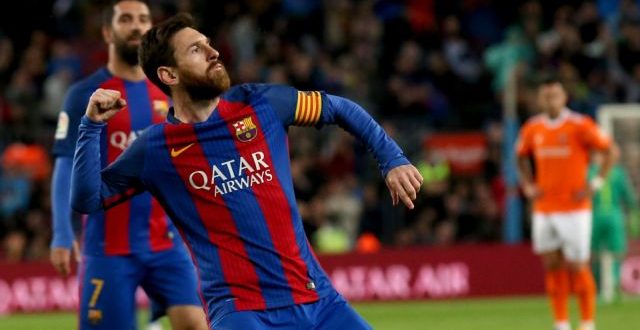 May 6, 2017 Comments Off on Lionel Messi Rejects New Contract At Barcelona 35 Views

Lionel Messi, Barcelona’s all-time record goalscorer, has rejected the offer of a new contract to throw his future at the Nou Camp into significant doubt.

The Argentina international has been with the Catalan giants since joining the club aged 13, but there are no guarantees he will extend his association with the club beyond when his deal expires in June 2018.

Leading Spanish publication AS understand Messi has rebuffed a new deal worth between €30m and €35m (£25.41m-£29.65m) following months of talks between the two parties.

Father and agent Jorge Messi has been central to the negotiations, but an agreement has not yet been reached.

Negotiations are however ongoing between the Messi camp and Barcelona, whose president Josep Maria Bartomeu has been reassured that a deal will be agreed but only on the right terms.

Messi, a five-time Ballon d’Or winner, is in no rush to put pen to paper – despite the looming expiration of his contract – and they are preparing to hold out for the best possible deal which they expect to be forthcoming.

Messi is seeking wages approaching what Neymar and Luis Suarez were awarded with when they signed new deals during the twilight of 2016. While the Uruguay international Suarez now earns a reported £230,000 a week at Barcelona, while Neymar saw his pay packet increase to £425,000-a-week with his release clause rising to €200m.

Technical secretary Robert Fernandez last month spoke of his optimism that both Messi and Andres Iniesta would agree new deals. However, during the early stages of negotiations chief executive Oscar Grau did throw the renewal of Messi’s contract into doubt when he suggested that the club had to operate with “common sense” and make “the numbers add up”.

Premier League side Manchester City, managed by former Barcelona boss Pep Guardiola, have been continually linked with luring Messi to the club. Chelsea and Paris-Saint Germain – two of the only clubs with the financial power and ambition to acquire Messi – may also be encouraged by the latest development regarding his future, yet an extension in Catalunia appears the most likely option.

Though the 29-year-old is approaching the tender years of his career his form has failed to subside. The former Newell Old Boys youngster has netted 49 times in all competitions during the 2016/17 campaign, including his 500th for Barca in the El Clasico win over Real Madrid at the Nou Camp.

During 16 years with Barcelona Messi has won 29 major honours including the La Liga title eight times and the Champions League on four separate occasions, with his status as the club’s greatest ever player, regardless of the decision over his future, firmly secure.