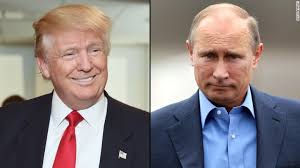 Trump to speak with Putin

President Donald Trump is set to speak by phone with Russian President Vladimir Putin on Tuesday, their first call since Russia denounced a US military strike against Syria last month.

Trump and Putin will talk Tuesday afternoon, a White House official said, in their third phone conversation since Trump took office. They last spoke following a terror attack in St. Petersburg, Russia, in early April, and also chatted a week after Trump’s inauguration in January.
The call comes after Putin characterized a US strike against a Syrian government air base “aggression against a sovereign state in violation of the norms of international law.” The US strike was in response to a suspected chemical attack by Syrian leader Bashar al-Assad, a Putin ally, on his own people.
Questions also continue to swirl over ties between Trump and Russian cyberintrusions during the 2016 presidential campaign, which the FBI and multiple Capitol Hill committees are investigating.
Post Views: 0