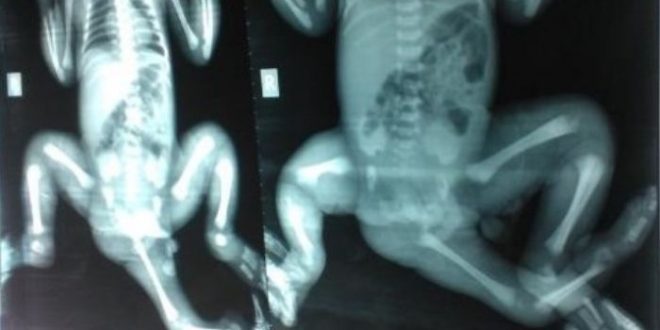 Choity Khatun was born in a village in Bangladesh with a condition called cordial twinning, which meant she had part of a twin develop in her perineum.

Head of surgery at Monash Children’s Hospital Professor Chris Kimber said it was amazing she had survived her first two years.

“This is very rare. Many of these children die in the womb, or they die soon after birth,” he said.

“Choity survived in her village and at a few weeks of age was taken to the main children’s hospital in Bangladesh and they were very perplexed as to what to do.

“Everything was connected in the wrong place … [and in the long term], she was highly likely to get overwhelming infections and die from those.”

Doctors in Bangladesh cut open her tummy and attached her bowel to her skin so she would not die from a bowel obstruction.

Her mother Shima Khatun said she did not understand what was wrong with Choity when she was first born.

“She [the doctor in Bangladesh] said she was like a twin baby. It was sad because our first son had died,” she said.

The Children First Foundation came across the case and brought Choity to Melbourne last year.

In November, after three months of planning, a team of eight surgeons operated on the toddler for eight hours.

Professor Kimber said they had to reconstruct many parts of Choity’s anatomy, as she had double of some organs, and many were attached in the wrong place inside her lower body.

He said the result was better than they could have imagined.

“When we started we thought she might end up being incontinent for life, but as we went on we found extra muscles and were able to reconstruct reasonable normal anatomy, and we’ve been able to achieve way beyond what we expected,” he said.