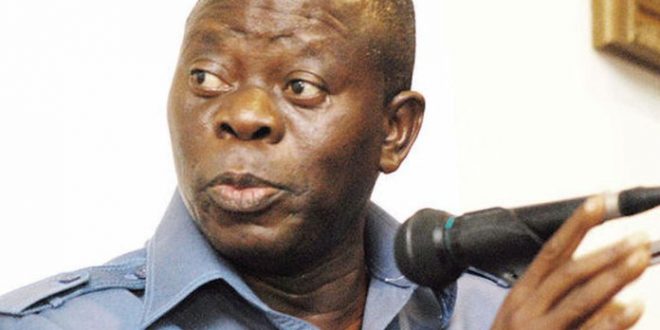 A former Governor of Edo State, Mr. Adams Oshiomhole, has described the death of the wife to the former Chairman of the Board of Trustees of the Peoples Democratic Party, Chief Tony Anenih, Patricia as a rude shock

Patricia Anenih passed away at the age of 74.

Oshiomhole, who described Tony Anenih as his leader, said in a statement yesterday that the news of the passing on of Patricia struck him with shock.

“When death comes, it leaves us speechless, mournful and sorrowful, making us to do a quick review of life and its ephemerality. It leaves on its trail anguish and a deep sense of painful nostalgia, with blurred memories. It hurts and discomforts. It disorients our sensibilities and famishes our thoughts. No matter how old, when death comes, it conveys very painful memories,” he said.

“The death of your wife of many years, Patricia Anenih; aged 74, leaves a bitter taste in our mouth. I know how it feels having travelled this road before when I lost my wife and a true companion of many years to the cold hands of death. It’s a feeling that comes with disheartening nuances and discomforting scenarios. Often times, we are consoled by the achievements of the dead and the exemplary life they lived during their time here on mother earth,” Oshiomhole added.

Oshiomhole described Anenih’s wife and the matriarch of the Anenih dynasty, as a role model to many women.
According to the former governor, Patricia held the home front with dignity, class and distinction, especially on many occasions when the home almost became a public place on account of his husband’s engagements in the political history of Nigeria.

“Her quintessential conduct distinguished her as a woman of fantastic background, nurtured in the emulative indices of a unique thoroughbred. She was calm and unassuming, always beaming with smiles at visitors and making sure one feels at home as soon as one steps his feet into your home,” he said.

Oshiomhole described the loss as a huge loss not just to Tony Anenih, whom he described as his leader, but to all the people, including Oshiomhole, who have had opportunity to connect with Anenih in one way or the other.
“Please, take heart. I am personally consoled that she lived a life of achievement and dedication to God. It is my prayer that the almighty God grant her eternal rest in the hereafter. May God Almighty, the creator of heaven and earth, grant you the grace, comportment and strength to bear this painful loss,” Oshiomhole added.