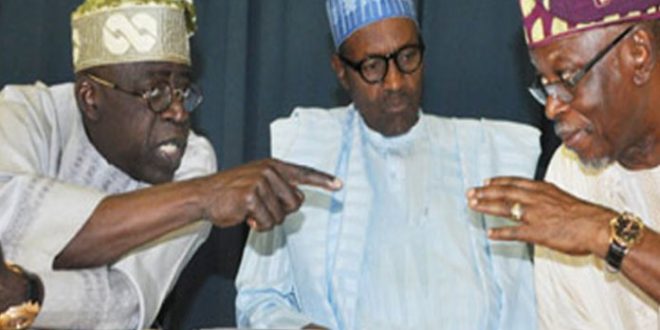 The meeting of the Senate caucus of the All Progressives Congress (APC) and the National Working Committee (NWC) of the party on Tuesday was characterised by fireworks, as the senators without holding back, expressed their disappointment with the party’s leadership and the executive arm of government.

Some of the issues discussed at the meeting included the inaction of President Muhammadu Buhari on the acting Chairman of the Economic and Financial Crimes Commission (EFCC), Mr. Ibrahim Magu, the suspension of the former majority leader, Senator Ali Ndume, the delay in the constitution of boards of agencies and parastatals, and non-consultation of party members and stalwarts in making key appointments.

The closed-door meeting which held at the National Assembly complex, began at 2.34 p.m. and lasted for about two and a half hours.

It had in attendance the National Chairman of the APC, Chief John Oyegun; Deputy National Chairman, Senator Lawal Shuaibu; National Organising Secretary, Senator Osita Izunaso; National Publicity Secretary, Mr. Bolaji Abdullahi; Special Adviser to the President on National Assembly (Senate), Senator Ita Enang; and other party executives.
Senate President Bukola Saraki led the Senate caucus to the meeting, the first between the caucus and the party executives since the inauguration of the eighth assembly almost two years ago.
The meeting was at the instance of the NWC to mediate in the lingering face-off between the executive and the Senate.

The lawmakers, who spoke off the record after the meeting, disclosed that they expressed disappointment that the resolution of the Senate on Magu had not received any response from the president, despite his rejection twice by the Senate.
“We let them know we feel disrespected as an institution. How can the Senate send a memo to the president on Magu and there has been no response?
“But by choosing to be silent and letting him continue in an acting capacity, it is a slight on us as an equal arm of government.

“We also let them know that the delay in the constitution of governing boards of agencies and parastatals is affecting us as party stakeholders. People who put in their all, mobilised for the party’s success in the 2015 general election are yet to be rewarded, and they call us everyday to ask us what is going on.
“The president has refused to make key appointments and even the few ones he has made, critical stakeholders were not consulted. Does he (Buhari) want to fill all the slots by himself?

“What about the people who worked hard at the state levels, what is their fate?” the lawmaker asked.
He disclosed further that the NWC appealed to the senators to reconsider the suspension of Ndume.
“We have taken a decision to suspend him. It is that simple,” the lawmaker stated.
Another lawmaker disclosed that the senators also expressed disappointment that the Oyegun-led NWC has ignored a bloc as important as theirs for such a long time and did not deem it fit to meet with the caucus almost two years into the lifespan of the administration.

“We let Chief Oyegun know he is part of the problem. How could he not have met with us regularly and it is only now when there is a crisis that he thinks he should meet with us?
“We were inaugurated, no agenda from the party, no inclusion. But they chose to fight us because we did not let them impose leaders on us. The party was treating us like the enemy, like the opposition,” the lawmaker said.

He added that at the end of the meeting, Oyegun assured the APC Senate caucus that the party would take urgent steps to correct the mistakes of the past.
“We expect the NWC to take our messages to the president and let him know we are really aggrieved,” the lawmaker said.

The leadership of the APC also used the opportunity of what Oyegun described as a “historic meeting” to solicit the support of its Senate caucus to canvass for funding of the party.
A party source disclosed that the NWC also presented its plans for the party’s national convention as well as the challenges it is contending with, particularly the paucity of funds and how this is hampering planning for the convention.

The party’s leadership recently took steps to raise funds internally through levies and voluntary contributions by its members, but the effort has not yielded much.
The NWC also appealed to the Senate leadership to help in moderating the behaviour of some of its members who are considered extremely critical of the Buhari administration despite being in the same party, a party source revealed.
Briefing newsmen after the meeting, Oyegun called for a ceasefire between the executive and the Senate for the sake of national development.

“I want to pay tribute to the National Assembly for the degree of cooperation that they have been extending to the executive in spite of the seeming differences under the surface.
“Secondly, I want to say that we have now completed our consultations with the National Assembly and we are going to move forward from now.
“One appeal I have to make is that it is necessary for all, at all levels of governance to maintain some level of respect and civility.

“My appeal is that as we start reconstructing relationships and consultations, there should be what I call a ceasefire in terms of the kind of verdict used all round.
“Once that is done, I can assure you and assure the nation that in the next couple of weeks we will have a level of amity, cohesion, cooperation and mutual respect between the three arms of government and the party,” he said.

Oyegun added that he had received the assurance of the Minister of Budget and National Planning, Senator Udoma Udo Udoma, that the ministry and the National Assembly have been very cooperative in working on the 2017 budget.
Saraki, on his part, said regular consultations between the legislature and the party were important, whether there is a crisis or not.

“As I said yesterday (Monday), some of these issues that we have, I don’t believe that there are fundamental issues more important to our people than the budget.
“Despite all the noise you heard last week, we still passed an amendment to the INEC law that had been there for over six or seven years. By this time next week, our Committee on Petroleum will lay to rest the PIB (Petroleum Industry Bill), which has never been done.
“We are focused on the major issues and we are not going to be distracted from that. And we are still going to do our work.

“Institutions are what we have and we must ensure that we respect that,” he said.
The Senate President also stressed that the issues with the executive would not distract the Senate from its commitment to the welfare of Nigerians.

“For us in the Senate, we are focused. We will continue to work. Today we are talking about meningitis, looking at how we are going to find funding for that.
“So, none of these issues is distracting us from that. And I think we have shown that over the last few weeks,” he added.