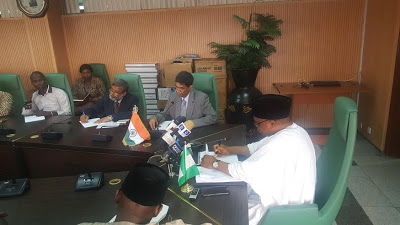 March 30, 2017 Comments Off on FG summons Indian High Commissioner over attack on Nigerians in India 8 Views

The Federal Government on Wednesday asked Indian Government to ensure the immediate arrest and prosecution of those responsible for attacks of Nigerian students in an Indian university. The Permanent Secretary, Ministry of Foreign Affairs, Amb. Olushola Enikanolaiye, made the call in Abuja at a meeting on the issue with the Indian High Commissioner to Nigeria, Amb. Nagabushana Reddy.

Four Nigerian students were attacked by a mob during a candle-light march for a 17-year-old Indian boy, who died of suspected drug overdose. It was alleged that Nigerians masterminded the death of the boy. Enikanolaiye said the call for the prosecution of culprits was necessary to serve as a deterrent to others and to forestall future occurrences. He said that the High Commissioner was invited to register the Federal Government’s concern over the incident. Enikanolaye said that contrary to the report that Nigerians masterminded the boy’s death, the boy who was said to be on drugs and must have had an overdose of it which might have led to his death in a hospital. “It is therefore, a concern to us that Nigerian students in that place were harassed, beaten up and many of them were seriously injured. “We think this should not have happened considering the excellent relationship between two of us — the two countries have things in common and have been great friends.” According to him, the concern of the ministry is that such a matter should not be allowed to affect the relationship between the two countries. He expressed concern that the incident was not the first of its kind as Nigerians had been attacked in the past by Indians. “This is not the first time this would happened; Nigerians have suffered similar attack in the past; so, what we will like to see on this occasion is that the perpetrator should be arrested. “And we want to see diligent prosecution so that it would serve as a deterrent to those who think they can take laws into their hands and harass students who are going about their studies. “That is why we felt we should register our concern to you on this occasion, and to please ask your government to take effective measures that this does not occur again.” In his response, the High Commissioner described the incident as deplorable. Reddy said that the Indian Minister of External Affairs had already issued a statement condemning the incident. He said that security operatives had been deployed to the area where the incident occurred, to ensure peace and safety of Nigerians and other foreigners. The envoy said that five of the seven accused persons had been arrested while security operatives were on the trail of the remaining two. He, therefore, appealed to foreigners in the country to be calm with an assurance that the government was committed to their safety. “The government is determined to see that justice is done,” the High Commissioner said. Meanwhile, Mrs Abike Dabiri-Erewa, the Senior Special Assistant to the President on Foreign Affairs and Diaspora, has advised Nigerians in India to remain calm and be watchful of their surroundings. Dabiri-Erewa, in a statement in Abuja on Wednesday, condemned the renewed attacks on some Nigerian students in India, describing it as “deplorable and unwarranted”. She urged the Indian government to ensure that any suspect was promptly arrested and prosecuted. The Presidential aide urged the Indian Government to protect Nigerian students in that country. (NAN)