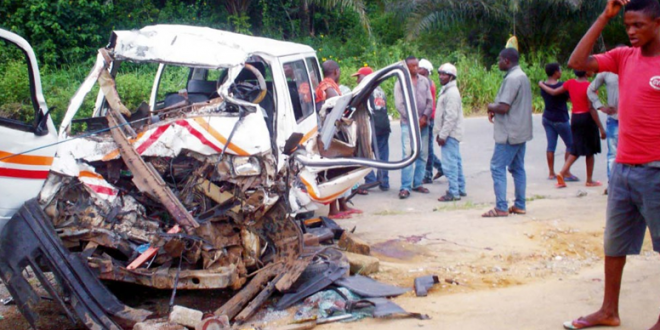 March 27, 2017 Comments Off on Drunk driver ran into five people and killed them in A’Ibom 25 Views

Five persons were on Sunday killed at Ukana Ikot Etim area of Essien Udim Local Government Area of Akwa Ibom State, when they were knocked down by an alleged drunk driver.

The man driving a Ford utility sport vehicle with registration number GCE 342 CX was trying to avoid two children that were crossing the road.

The driver, whose identity had yet to be revealed, was said to be speeding, when he suddenly crashed into the seven people who were waiting at a bean cake  (akara) spot at the  Ukana Ikot Etim Junction.

An eyewitness, Mr. Godwin Anthony, said the driver crashed into the five pedestrians who died instantly while the remaining two sustained serious injuries.

According to him, when they approached the driver, they discovered that he was drunk. He added the driver with the vehicle had been taken to the Ikot Ekpene Police Command, SARS Department.

Anthony said the seven persons were returning from church on Sunday.

Efforts to speak with the Commissioner of Police, Mr. Donald Awunah, proved abortive as prompt from his telephone indicated that his line was unavailable.

But the Public Relations Officer of the Federal Road Road Safety in the state,  Mr. Uwen God’sgift, said they had yet to confirm the story.