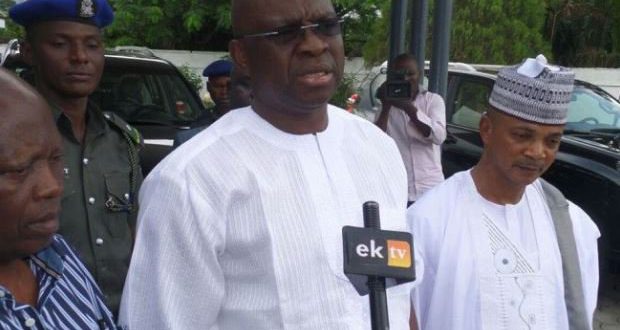 March 25, 2017 Comments Off on Buhari should tame his powerful appointees- Fayose 11 Views

Fayose said this in a statement issued by Idowu Adelusi, his media aide, on Friday.

He said Nigerians were beginning to believe the statement of Aisha, the president’s wife, that a cabal had taken over the government.

Fayose’s latest onslaught is coming a day after he promised Babatunde Fashola, minister of power, works and housing, that he would tone down his criticism of the president.

In the statement, the governor said the refusal of Hameed Ali, comptroller-general of the Nigeria Customs Service (NCS), to wear a uniform for an appearance at the senate was shameful, and that it portrayed the Buhari-led administration in a bad light.

He then volunteered himself to help curb the excesses of some of his appointees.

“Governance has been reduced to a theatre of the absurd. These appointees of yours are needlessly and embarrassingly flexing muscles and are heating up the polity. They appear to be having fun and regaling themselves at the expense of the nation,” he said.

“The economy has collapsed and the people are suffering. There is hunger and anger never before witnessed in the land. Yet, presidential appointees are preoccupied with trivialities and inanities. Wearing of uniform has suddenly become a supreme court matter. Why a man who will not wear uniform went to take a uniformed job beggars belief.

“How someone who has so little respect and scanty regard for an organisation like the Nigeria Customs Service should be made to head the same organisation must baffle right-thinking Nigerians. In other societies where people have a sense of decency and decorum, people with such irreconcilable differences would honourably resign their position.

“And where a government finds itself unable to effectively govern, as we appear to have here on our hands, it behoves the head of that government to do the needful.

“Mr President, I, Ayo Fayose, volunteer to help you in this regard. As a state governor, I cannot brook a tenth of what you are taking from your appointees. None of my appointees can disrespect and disparage the Ekiti state house of assembly like your appointees are doing to the national assembly.

“Mr President, let it not be said that you have lost grip of your government. Nigerians are beginning to believe, as a statement of fact, your wife’s allegation that a cabal has taken over your government.”

He urged the president to rein in his appointees because they appeared more powerful than he is.

“Your defence that your wife belongs in ‘the other room’ now rings hollow in the ears of Nigerians. The saying is that he who appoints can also disappoint,” he said.

“Your appointees are your creation and it is an aberration when they become greater and more powerful than you. Mr President, the tail is wagging the dog right now. You must take effective and firm action to reverse this ugly and unwholesome trend. I am also the head of a government and I know how it works.

“The ‘consortium of presidents’ around you, as Nigerians now derisively refer to those ‘powerful’ and larger-than-life appointees of yours who take delight in riding roughshod over the polity and desecrating the hallowed chambers of justice, must be cut to size.”

Fayose assured the president that Nigerians were ready to queue behind him “to put an end to your appointees’ shenanigans”.

“Did you listen to what a distinguished senator of the federal republic said this week on the floor of the red chamber; that for the 49 (sic) days that you were away on medical leave in London, your appointees were gentle and behaved themselves and there were no killings in any part of the country by rampaging herdsmen; but now you are back and the troubles are back with us again? We all prayed for your quick recovery and swift return to office. Must we now regret doing so?”