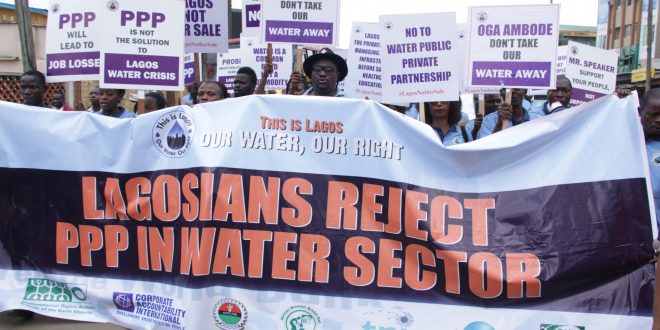 As the world marked the World Water Day yesterday, Environmental Rights Action/Friends of the Earth, Nigeria and other civil society gathered in their thousand to commemorate by reststaing its oppostion to the planned water privtatisation of water by govrnor Akinwunmi Ambode

The group in the number marched to Alausa, the seat of Lagos State government  but was cordoned off by men of the Nigeria Police, as activists stormed the premises of the Lagos State House of Assembly to deliver a letter condemning the move to privatise water in the state by government.
Placard wielding activists who gathered in the heart of Ikeja, the capital city of Lagos, as early as 8:00am, marched in a procession in their hundreds in a journey of about three kilometres to the government seat, distributing handbills and chanting anti-privatisation songs to press home their demand.
The procession which enjoyed the support of many Lagosians, many of who went off their tracks to join the agitation was however almost truncated with the heavy presence of fully armed policemen drafted to the Lagos State secretariat, ostensibly to curtail the protest.
The presence of the men of the police Force was more at the entrance to the Lagos State Assembly where stern looking policemen, all armed to the teeth, mounted barricades to prevent the entrance of the surging protesters.
Bent on handing a letter addressed to the Lagos government on the issue of privatisation to the governor, Akinwunmi Ambode, through the lawmakers, the protesters meandered their ways to the entrance of the assembly where another set of policemen ordered a stop.
What started as a peaceful agitation almost turned awry as none of the government officials came out to receive the activists who were bent on delivering the letter to the government, not by proxy.
The attempt to send a Special Assistant to the governor to come and appeal to the protesters after some time, was rebuffed by the activists, who insisted they must hand over their anti-privatisation letter to at least a senior member of the executive at all cost.
The resistance later forced out the Lagos State Commissioner for the Environment, Dr. Babatunde Adejare, who appealed to the raging activists, on the intention of government on its Private Public Partnership, PPP, drive in the state’s water sector.
Adejare noted that the environment protection and management law recently signed by Akinwunmi Ambode, the Governor of Lagos State, would not in any way prevent people’s access to good and potable water.
Akinbode Oluwafemi who led other group of activists to the Government Office, expressed shock at the reception of the groups by government, noting that being public servants entails that government should be ready to listen and respond to people’s agitation at all times.
Oluwafemi who is Executive Director, Environmental Rights Action, Friends of the Earth, Nigeria, ERA/FoEN, said the agitation of the groups was selfless but based on empirical study of other countries that had embarked on the part of privatisation of water and all got bruised in the process.
While noting that the government of Ambode has engaged in many pro-people projects, he warned that the need to deviate from the track of privatisation of Lagos water is non-negotiable, particularly, in the face of the current economic hardship in the state.
“As we have mentioned in our earlier communication on the same issue, evidence abounds showing that countries that have experimented the public-private partnership (PPP) model of water privatisation burnt their fingers and have reconsidered to municipalise.
“The models upon which the PPP is based has failed to uphold the human right to water and have locked governments into long-term contracts. Such deals have proven exceedingly difficult for cities to exit, despite rate hikes, service cut-offs and unfulfilled infrastructure promises, and they prevent cities from making crucial progress towards real solutions to water access challenges,” he said.
To Oluwafemi, “Lagos does not need to experience social conflicts or drown in debt to steer clear from this slippery road fraught with booby traps.”