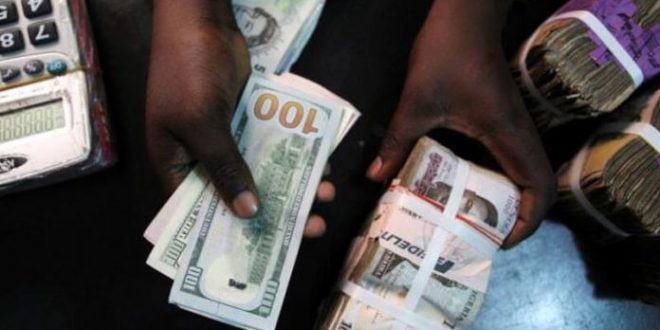 Dollar Drops Below N399/$ On Tuesday

For the first time in seven months, the dollar fell below the psychological N400 barrier, when the greenback traded at N399 to the dollar in Lagos and exchanged at N395 in Abuja, lower than N410 at which it traded on Tuesday.

With the gains made by the local currency in the last five weeks, the naira inched closer to one of the Central Bank of Nigeria’s (CBN) key foreign exchange policy objectives of an exchange rate convergence.
The naira trades for N375 to the greenback for invisibles and at N307 to the dollar on the FX interbank market, the official window for manufacturers and importers of raw materials eligible to buy FX from this segment of the market.
The last time the naira traded at between N395 and N400 to the dollar on the parallel market was in August 2016.

The significant gains made by the naira on the parallel market, according to market analysts, was a reflection of the improved confidence in the FX market, following the sustained dollar interventions by the CBN since last month.
One analyst also attributed the gains made by naira to the Bureau de Change (BDC) operators that are awash with dollars and with little or no customers to patronise them.

He said several retail customers who used to resort to the BDCs (which realistically fund the parallel market) to fund invisible transactions now get to buy dollars at a lower rate from the banks.

“The BDCs are awash with cash. Remember that the central bank sold about $200,000 to each BDC at some point and they had also bought dollars at high rates which they hoarded, thinking that the naira would remain in a free fall.

“But with the CBN’s intervention, they are stuck with loads of dollars and little or no customers, so they have stopped buying dollars and are looking for avenues to offload what they bought at ridiculously high rates.

“Essentially, the speculative attacks on the naira has come back to haunt them and they’ve got their fingers burnt,” he said.

In all, the central bank has auctioned a total of $1.895 billion through forward sales, as well as targeted intervention for invisibles.

This amount does not include its daily intervention of $1.5 million on the interbank market.
The CBN Governor, Mr. Godwin Emefiele, on Tuesday expressed optimism about the convergence of the FX rates on the official and parallel markets, stating that the gains made by the naira against the greenback in the last five weeks was not a fluke.

Emefiele said he was happy that the central bank’s intervention was yielding positive results.
“I am happy, indeed very gratified, that the interventions have been positive, we have seen the rates now converging and we are strongly optimistic that the rates will converge further.

“In terms of sustainability, I think it’s important for us to say that the foreign reserves at this time are still trending upwards to almost $31 billion as I speak with you.

“And the fact that we have done this consistently for close to five weeks, should tell everybody or those who doubt the strength of the central bank to sustain this policy,” he had said after the meeting of the Monetary Policy Committee (MPC).

But an analyst at Ecobank Nigeria, Mr. Kunle Ezun, who welcomed the development in the FX market, pointed out that achieving a convergence between the official (interbank rate) and parallel market rate would be a more onerous task.
“For us to have a convergence between the interbank and parallel market, it would require the CBN to devalue the official exchange rate to about N350 to the dollar.

“But what the CBN has done in the last one month has really helped the parallel market rate. But we need to see improved liquidity on the interbank market,” Ezun said in a phone chat with THISDAY.