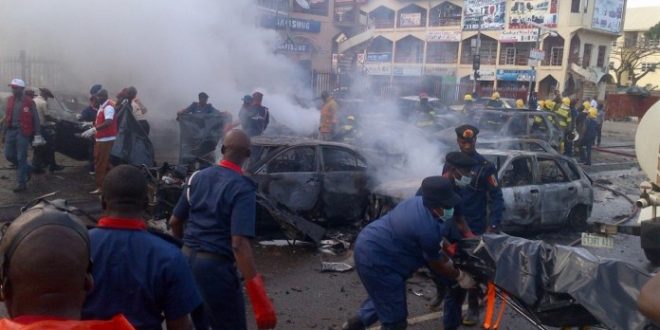 March 16, 2017 Comments Off on Six Persons Die in Suicide Attacks in Maiduguri 14 Views

Six persons were on Wednesday killed in suicide attacks in Maiduguri, the Borno State capital.

According to a statement by the information officer in charge of the National Emergency Management Agency (NEMA)’s North-east Zonal Office, Mallam Abdulkareem Ibrahim, the attacks happened at about 1.15a.m. on Wednesday.

He said the attacks were by four teenage girls who had explosive devices strapped on them.

The statement read: “Four female teenage suicide bombers and two other men died (six people) when the four females detonated explosives at Usmanti along Mina Garage Road at about 1.15a.m.”

He added: “Sixteen people who got injured were administered with first aid by rescue workers before being transported to the state Specialist Hospital and University of Maiduguri Teaching Hospital.”

When THISDAY visited the scene of the incident close to the Police Hospital in Maiduguri, it was gathered that the teenage girls strapped with the explosives poached for victims.
One of the residents of the area, Mustapha Mele, said the two males had opened the doors of their homes for the female teenagers when they knocked on their doors.

He said: “Immediately they opened the doors for them, they detonated the explosive devices which led to their death.”
However, the Nigerian Army, Police, and NEMA gave conflicting accounts of the suicide bomb attacks.
The army in a statement by the Deputy Director, Army Public Relations, Theatre Command Operation Lafiya Dole, Colonel Onyema Nwachukwu, who gave the time of the attacks at about 1.30a.m., said it was by three suicide bombers.
The army spokesman, who did not give details of the age of the suicide bombers, in the statement, said: “At about 1.30a.m. today (Wednesday), three suicide bombers attempted infiltrating Maiduguri metropolis through Molai or Usmanti but were intercepted by vigilant civilians in that community.

“Realising that they had been busted the suicide bombers detonated their suicide vests killing themselves. Regrettably however one civilian died in the explosion and seven others suffered injuries of varying degrees.
“Troops were immediately deployed to cordon off the area and the injured are currently receiving medical attention at the UMTH.”

He added that: “These attacks on soft targets are indicative of a drowned Boko Haram group. They have lost ground and focus, hence the only way to remain relevant is to callously attack soft targets using person borne IEDs and other forms of IED.

“We are countering this development with constant patrols and monitoring of the metropolis and other populated areas. We are equally sensitising the public on the need to remain vigilant at all times and report any suspicious moves and persons to security agencies.”
The police gave a different version from the two, disclosing that five persons were killed and seven other persons injured.

The Borno State Commissioner of Police, Mr. Damien Chukwu, during a press conference, said the suicide attacks were by four persons, who died while detonating explosives that claimed another live.
He said eight persons were injured in the attack.