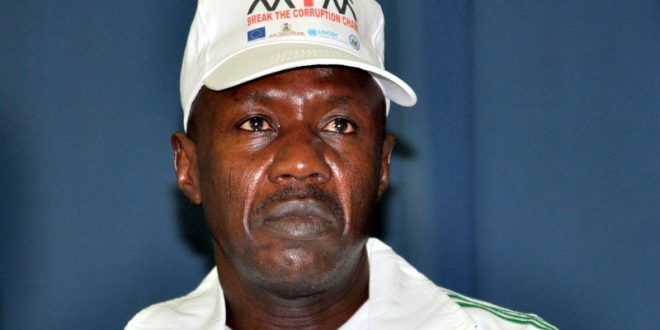 The Senate has rejected the nomination of Ibrahim Magu as EFCC chairman. This is coming after DSS submitted a report to the senate this morning stating that Magu is not fit to be EFF chairman

The lawmakers said they could not okay President Muhammadu Buhari’s nomination of Mr. Magu based on security report available to them.

The spokesperson for the upper legislative chamber, Aliyu Abdullahi, revealed this Thursday afternoon after the Senators emerged from a closed-door meeting where Mr. Magu’s confirmation was discussed.

“The Senate wishes to inform the public that based on available security report, the Senate cannot proceed with the confirmation of Ibrahim Magu as Chairman of the Economic and Financial Crimes Commission.

“The nomination of Ibrahim Magu is hereby rejected and has been returned to the President for further action,” Mr. Abdullahi said.