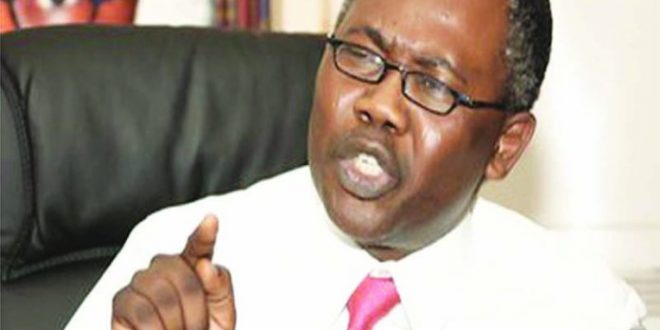 A former Attorney General of the Federation (AGF) and Minister for Justice, Mohammed Bello Adoke (SAN), has again faulted the decision of the Economic and Financial Crimes Commission (EFCC) to prosecute him and others for resolving the ownership disputes of the Oil Prospecting Licence 245 between the federal government, Shell Nigeria Ultra Deep and Malabu Oil and Gas Limited.
In a letter he wrote to the incumbent AGF and Minister for Justice, Abubakar Malami (SAN), Adoke said three past presidents namely: Olusegun Obasanjo, Umaru Yar’Adua and Goodluck Jonathan, approved the settlement arrangement that culminated in the final settlement of the protracted dispute.

The former minister also expressed regret that the EFCC had allowed itself to be used by the late Sani Abacha’s family to pursue personal interest instead of national interest for which the commission was established.

He wondered why the Abacha’s family had refused to go to court if truly the family’s interest was adversely affected by the settlement agreement.

The former AGF described as spurious and malicious, the charges filed against him and other individuals and companies, demanding that Malami should speak out on the issue since his office has all the facts.

Adoke said: “Recent actions of the EFCC to impugn the settlement which was done in the national interest, particularly their penchant to suppress facts relating to the transaction and the filing of criminal charges against me for conspiracy and aiding the commission of money laundering offence and the latest allegations of bribe taking, have revealed very clearly that either your office and that of the EFCC are not working in harmony or that something sinister is going on.

“Having given you the benefit of the doubt that you would not sponsor deliberate falsehood against me, my suspicion is that there is an orchestrated plot by the EFCC to deliberately impugn a transaction that has been scrutinised and approved by at least three past presidents and three AGFs; drag my name in the mud and paint me with the tar of corruption in order to attract public odium.

“As the Chief Law Officer of the Federation, you have a public duty to speak on this matter so that Nigerians would know whether I acted mala fide or abused my office in the entire transaction leading to the final implementation of the settlement. Nigerians need to know whether your predecessors in office from 2006 to May 2015 acted in the national interest when they brokered and implemented the settlement.

“It will also be instructive for Nigerians to know whether your predecessors were carrying out their personal agenda or that their respective actions were carried out with the knowledge and approval of their respective principals.

“Honourable Attorney General of the Federation, your response is crucial because it has become glaring that the actions of the EFCC in respect of the transaction are not in the national interest, but rather in furtherance of a plot to serve the interests of some powerful families and individuals who are aggrieved by my refusal to accede to their requests to compel Malabu to pay them certain amount from the proceeds of its divestment in OPL 245, and the subsequent re-allocation of the oil block to Shell/Eni. You will recall that I had on several occasions asserted this fact. I am therefore surprised that a national institution is being used to further the interest of individuals whose claim or shareholding in Malabu remains shady, and prefer to engage proxies to fight their battles.

“The pertinent questions that must be asked are: Why are these powerful families and individuals reluctant to litigate their dispute in the law courts if they are confident about their legal claims to the Shares of Malabu? Why are they intent on using state actors and institutions for their private benefits? Where were they when Malabu was negotiating with the federal government from 2006 to 2011 when the settlement was finally implemented? Honourable Attorney General, you will be doing Nigerians a great favour by asking the EFCC, the Abacha’s family and other powerful individuals involved to answer these important questions.”

After chronicling how the dispute over OPL 245 started and efforts by successive administration to get it resolved, Adoke said: “It is therefore quite evident from the foregoing that the role played by the federal government, its agencies and officials in relation to block 245 was essentially that of facilitator of the resolution of a long standing dispute between Malabu and SNUD over the ownership and right to operate block 245. At all times, material to the resolution of the dispute, the federal government was not aware of any subsisting third-party interest in Malabu’s claim to OPL 245 and neither did any person or company apply to be joined in the negotiations as an interested party.”

According to him, the resolution of the lingering dispute over block 245 was in furtherance of government’s demonstrable commitment to attract investment in the oil and gas sector of the economy, and encourage genuine investors (local and foreign) by creating the enabling environment for their business to thrive.

He said: “The Office of the Attorney General of the Federation superintended over the process to ensure that the implementation was holistic by ensuring:

that the requisite Presidential Approvals were sought and obtained; that all the relevant Ministries, Departments and Agencies (MDAs) such the Ministry of Petroleum

Resources, Ministry of Finance, the Department of Petroleum Resources (DPR) and the Nigerian National Petroleum Corporation (NNPC) were involved in the resolution and final implementation of the settlement; that the relevant agreements such as OPL 245 Resolution and Re-allocation Agreements were duly executed by line Ministries and

The former minister of justice demanded to know where he went wrong for EFCC to single him out for prosecution.

He also asked the incumbent AGF to consider the effect of section 5 of the Constitution of the Federal Republic of Nigeria, 1999, as amended, with respect to the vesting of all the executive powers of the federation in the president to exercise by himself and/or through his ministers and appointees.

Adoke asked: “What is the effect of section 5 of the Constitution on persons who act pursuant to lawful presidential approvals? This is more so as two out of the three presidents that had the opportunity to scrutinise this settlement (Presidents Obasanjo and Jonathan) are alive. Have they disowned the settlement? Has our predecessor in office, Chief Ojo, distanced himself from the settlement he brokered? Have the Ministers of Petroleum Resources and Finance at the time of implementation of the settlement (Mrs. Diezani Allison-Madueke and Dr. Olusegun Aganga respectively) disowned the settlement or their signatures?

“It is my respectful view that Nigerians deserve answers to these questions as it will help them and myself to understand the actions and the machinations of the EFCC masquerading to be acting in the national interest while surreptitiously deploying state resources and machinery to promote the personal agenda of their cohorts.”

He also appealed to the justice minister to be mindful of his “overarching powers over public prosecution and the need to ensure that state institutions do not become persecutors or instruments in the hands of those pursing personal vendetta.”

According to him, the constitution and the traditions of the legal profession demand that the AGF oversight over public prosecution.

“Consequently, if you find that I had breached my Oath of Office or abused my office, please do not hesitate to bring me to justice.

“However, if it is the contrary, as I strongly believe that certain individuals who had vowed to settle scores with me are now being aided by state institutions such as the EFCC, I deserve protection from these unwarranted attacks and dehumanising treatment that I am being subjected to merely because I chose to serve my fatherland,” he added.

The former AGF also explained that the Terms of Settlement encapsulating details of the settlement between the Federal Government of Nigeria and Malabu Oil and Gas Limited (Malabu) was executed on November 30, 2006.

He said the Terms of Settlement, which was later reduced into a Consent Judgment of the Federal High Court; Abuja was brokered by a former AGF Ojo, and signed on behalf of the federal government by the then Minister of State for Petroleum Resources, Dr. Edmund Daukoru, during the administration of President Obasanjo.

Adoke said when he assumed office on April 10, 2010, he inherited a Consent Judgment, which had undergone the scrutiny of three presidents and Attorneys General.

He said he was therefore restricted to the implementation of the settlement as the issue of ownership of OPL 245 had already been resolved in favour of Malabu by the Terms of Settlement on November 30, 2006, and the Consent Judgment of the federal high court Abuja.

Adoke said he also inherited an on-going Investor/State Arbitration at the International Centre for the Settlement of Investment Dispute (ICSID) in which SNUD had initiated arbitral proceedings against the federal government claiming damages in excess of $2 billion for taking back OPL 245 re-awarded to them when Malabu’s title was initially revoked by the government. SNUD’s claims were also premised on the fact that they had substantially de-risked the block.

He recalled that in furtherance of the Indigenous

Exploration Programme Policy introduced by the federal government in the early 1990s to encourage effective development of indigenous capability in the upstream sector of the oil industry, Malabu and other indigenous oil and gas companies were allocated oil blocks which they were expected to develop in partnership with international oil companies as technical partners.

The former AGF stated that Malabu was allocated OPL 245 in April 1998 and in accordance with the terms of the grant; it appointed SNUD as its technical partner.

The two companies, according to him, executed relevant agreements, including a Joint Operation Agreement in 2001. Records indicate that SNUD took 40 per cent participating interests in the venture in a farm-in-agreement, and also signed agreement with Malabu as its technical partner for the venture, Adoke added.

He said: “Although, Malabu was issued a licence for block 245 in April 2001, the same licence was subsequently revoked by the federal government on July 2, 2001. Exxon-Mobil and Shell were invited in April 2002 to bid for OPL 245 despite subsisting contractual agreements between Malabu and SNUD with respect to OPL 245. Malabu was dissatisfied with

the revocation and contended that the circumstances leading to the revocation of its licence on block 245 was less than transparent and smacked of inducement and connivance from SNUD, its technical partner.

SNUD by the federal government was done under questionable circumstances. It then petitioned the House of Representatives Committee on Petroleum to look into the matter. It is apposite to note

that the House of Representatives Committee on Petroleum found no rational basis for the revocation and reprimanded Shell for its complicity. The Committee also directed the federal government to withdraw the re-award it made to Shell and return OPL 245 to Malabu, the original allotee of the block.”