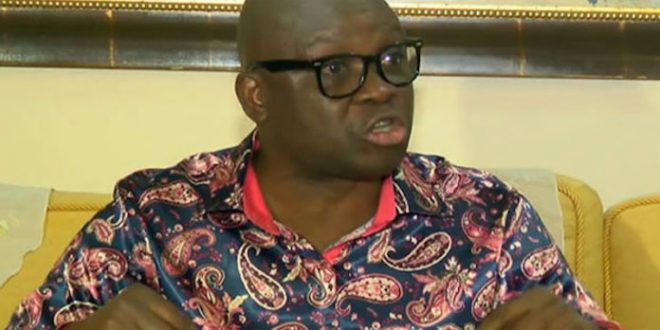 March 9, 2017 Comments Off on Rape an Ekiti woman, You’ll Go In For Life Imprisonment- Fayose 24 Views

The Ekiti state governor, Ayodele Fashola  says he had enacts law which proposes life imprisonment for raping an Ekiti woman.

He was speaking on Wednesday at the Oluyemi Kayode Stadium atthe celebration of the International women’s day.

Fayose thanked his wife for her support and rained praises on her.

“I thank you all for allowing me to celebrate you. Let me appreciate my wife, my one and only, a prayer woman,” Fayose said.

“God gave me a woman who prefers to go on her knees against the odds. When I come in another world, I’ll still marry you.

“I’ve come to realize that beauty is from within, but men follow what they see and get disappointed.

“In this one, I’m appointed and not disappointed,” he said, pointing to his wife.”

Fayose said, “I have enacted law – if you rape an Ekiti woman, you’ll go in for life imprisonment.

“As powerful as men are, they’ll be empty without women. It takes a foolish and senseless man to beat his wife. Very irresponsible men beat their wives.

“I want to announce the wonderful thing you must look out for. My government has set aside already, the sum of N500m as support for women.

“I will support women in power and I will go ahead to support those of you in petty trades.

“I want to assure you that you have a father, a brother, a son in me. I will never abandon you.

“I don’t want you to be confined to the kitchen and the inner and the other room.

“As part of the activity to mark this occasion, I’m going to elevate a woman who is currently an executive secretary and is dew for retirement in 2 months.

“I will promote her to the position of a permanent secretary.”

He assured the women of his accessibility, saying “I’m just a call away”.