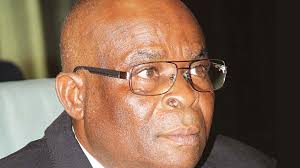 Walter Onnoghen To Be Sworn In As CJN Tuesday

March 7, 2017 Comments Off on Walter Onnoghen To Be Sworn In As CJN Tuesday 8 Views

Walter Onnoghen  will on Tuesday be sworn as the 17th chief justice of Nigeria (CJN)  on Tuesday.

The swearing in ceremony will be performed by the vice president Yemi Osinbajo   at the council chambers of the presidential villa in Abuja.

President Muhammad Buhari appointed him in acting capacity on November 10, 2016 when Mahmoud Mohammed, his predecessor, retired.

But Buhari delay in transmitting his name to the senate for confirmation with many accusing the president of ethnic bias.

Abubakar Umar, former military governor of Kaduna state, had urged the senate not to confirm any nominee apart from Onnoghen.

However,  two days to his expiration as the acting CJN, Buhari instructed Osinbajo to send Onnoghen’s name to the senate for confirmation,

He was confirmed by the senate on Wednesday.