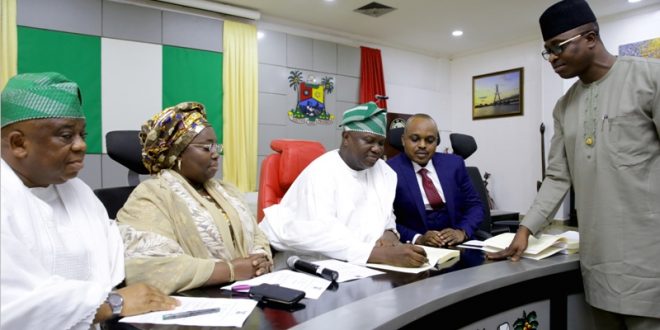 According to the governor, the bill will drive the adoption of innovative technology to tackle existing environmental problems in the state.

The new law gives Lagos State Waste Management Agency (LAWMA) the authority to review and regulate all waste management activities within the state while Kick Against Indiscipline (KAI) will be rebranded and transformed into the Environmental Sanitation Corps Agency.

“While charting a new direction, it became quickly apparent that government on its own would struggle to bear the cost of the wholesale changes while meeting its other obligations across other equally vital sectors.

“It was necessary to make investor friendly laws that attract the type of capital we need to further our development agenda and achieve our sustainability goals. We believe it is worth the risk involved in changing the legislative framework if the reward is a healthier and cleaner Lagos for our children – our future,” the Governor said.

“Everyone from the cart pushers to the existing PSPs and casual workers at the dumpsites have been considered in the plan and will be accommodated within the new environmental regime. In addition, we are extending opportunities to everyone along the value chain by working to create vocational training in the related areas through LASTVEB,” he said.

“He also said that an annual Public Utility Levy (PUL) would be introduced to replace all service fees previously paid to the Waste Management authorities, adding that the public was carried along in determining the rates, which according to him is relatively low.

“The PUL will be a major contribution to the State’s ongoing efforts to address severe challenges that are unique to Lagos because of rising urbanization. The money will be held in the Environmental Trust Fund and managed meticulously by a Board of SEC regulated trustees.

“The trustees are under strict obligations to the people of Lagos and will be accountable to the people for every naira we spend in line with our overall environmental agenda. Compliance is the key. The burden of the cost of providing these services will remain low if everyone does their part and pays their PUL.

“With the newly positioned LASECORPS, we will work within the community to enforce the new laws. The State will have a zero-tolerance policy for offenders because simply put, disregarding payment of your PUL or flouting the new regulations ultimately promotes activities that lead to the loss of lives,” Governor Ambode said.

However, environmental activist are skeptical of the the law.  They believe it may have provision criminalizing boreholes as they say they did not see the clean copy sent to the governor.

They add also that they have not seen the copy that the governor signed .