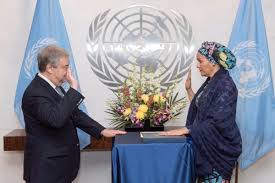 Amina Mohammed, the immediate past minister of environment   has been sworn in as the deputy secretary-general of the United Nations (UN), on Tuesday in New York, United States

Antonio Guterres, secretary-general of the UN, administered the oath on Mohammed, former minister of environment.

In accepting the appointment, Mohammed had said she was humbled at the opportunity to serve humanity.

“I want to say that I am extremely, very, very proud that you accepted to join our team. Thank you very much,” Guterres told Mohammed.