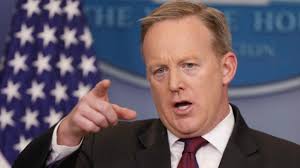 CNN and other media barred from White House briefing

February 25, 2017 Comments Off on CNN and other media barred from White House briefing 17 Views

The White House blocked a number of news organizations from attending an informal briefing Friday, a rare and surprising move that came amid President Trump’s escalating war against the media.

White House press secretary Sean Spicer banned reporters from CNN, the New York Times, Politico, the Los Angeles Times and BuzzFeed from attending a “gaggle,” a non-televised briefing, but gave access to a number of other reporters, including those representing conservative outlets.

The White House said the decision was not made to exclude journalists from organizations that have been the most critical of Trump in their reporting in favor of those who are more favorable. Although the invited included Fox News, Breitbart and the Washington Times — all considered sympathetic to the administration — the approved list also included CBS, NBC, ABC, the Wall Street Journal, Bloomberg, Time and the Associated Press.

However, reporters from AP and Time decided against attending the briefing in protest of the exclusion of other news outlets.

The unusual ban came the same day that Trump, appearing at an annual gathering of conservatives, launched another round of complaints about the news media. Speaking at the Conservative Political Action Conference (CPAC), Trump called reporters “dishonest” and “fake” and denounced the use of anonymous sources in reports about his administration.