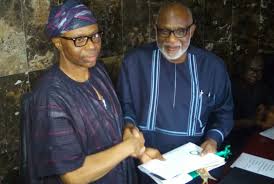 Akeredolu Sworn In As Ondo Governor

February 24, 2017 Comments Off on Akeredolu Sworn In As Ondo Governor 12 Views

Rotimi Akeredolu, Senior Advocate of Nigeria(SAN) has been sworn in as the governor of Ond state.Ondo state is in a celebration mood today, following the swearing in of

Governor Akeredolu, who was sworn in on Friday ,  is the sixth elected governor oof the state.

Among the dignitaries in attendance at the event were All Progressives Congress(APC) party supporters, APC National Chairman, John Oyegun, Minster of Solid Minerals, Dr. Kayode Fayemi, Minister of Information and Culture, Lai Mohammed and other family and friends.INEC Declares Rotimi Akeredolu Winner

Returning officer, Professor Ganiu Amali made the announcement at about 12:50PM on Sunday.

Mr Olusola Oke of the Alliance for Democracy (AD) follows with 126, 889 votes.