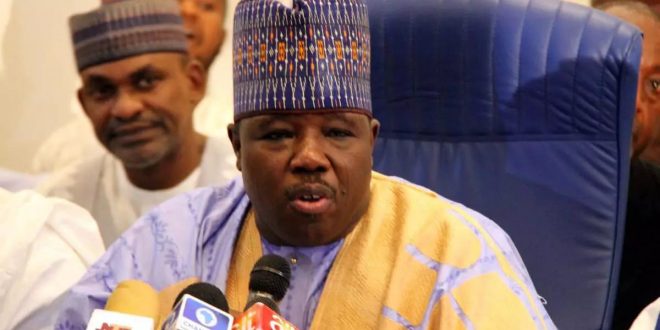 I’m ready to quit as PDP chairman after convention- Sherif

February 23, 2017 Comments Off on I’m ready to quit as PDP chairman after convention- Sherif 11 Views

The National Chairman of the People Democratic Party, Senator Ali Modu Sheriff, has said he is ready to vacate office after the national convention of the party, where new officers will be elected for the former ruling party.

He, however, warned governors, elected on the platform of the PDP, not to divide the party.

Sheriff was, on Friday, declared the rightful National Chairman of the PDP by the Court of Appeal, Port Harcourt, Rivers State.

Speaking in Abuja on Wednesday when he received members of the party from the South-West, the former Borno State governor stated that he was ready to leave office as “soon as a national convention is held and new national officers are produced.”

Sheriff’s guests were led by the zonal and state officials of the party from the six states in the geopolitical zone, except Lagos State.

He said he would leave office after the election of officials, who, he said, must be the choice of the people.

“Ali Modu Sheriff is not here to remain as national chairman. As soon as we hold our national convention, I’m leaving.

“I will make sure that we do a credible convention and we elect leaders that are accepted by the grass roots; that is our mission. I will do that by the grace of God,” he said.

Sheriff, who was flanked by some of the reinstated national officers, among who was the National Secretary, Prof. Wale Oladipo, said the governors were critical to the repositioning of the party.

He stated that he was aware of the many unprintable names he had been called since the Court of Appeal pronounced him as the national chairman of the party, stressing that he would not take issue with those calling him such names, particularly, the Governor of Ekiti State, Mr. Ayodele Fayose.

Sheriff said, “I plead in the name of God, let’s bring peace to the PDP. Let us build this party. If you like and you want to change something, wait for the convention and vote for the person you like and Nigerians and the world will see that you’re are validly elected by the PDP.

“Yes, our governors are very important; they are leaders of this party in their own right. They don’t have to divide the party.

“I will not come down to the level of Fayose. I beg him to respect the PDP; whatever he said about me, posterity will judge him. He should devote more energy and time for the rebuilding of the PDP.”

He noted that his victory at the court was not for himself alone, but for all members of the party. He appealed to the governors and other members of the PDP to be cautious in their utterances.

“People can vent their anger and say what they want but as a leader and a father to all, I want to make sure the party is united.

“I have no issue to take with anybody. My task is to reposition the PDP and bring it back to its position in 1999,” Sheriff stated.

The PDP chairman explained that he was already working with security agencies on how to reopen the party’s national secretariat shut since May 2016.

The police shut the secretariat, located at Zone 5, Wuse District of Abuja, following clashes between a faction of the party loyal to Sheriff and another faction loyal to the sacked national caretaker committee, headed by a former Governor of Kaduna State, Senator Ahmed Makarfi.

Sheriff said, “Between now and Friday, we will move back to the secretariat. We have transmitted all the legal documents to police and the Department of State Services that intervened at some point in time to avoid chaos.”

Sheriff, who is still facing stiff opposition from the governors, the majority members of the Board of Trustees and statutory organs of the party, said there was an agreement between him and the Makarfi faction not to go to the Supreme Court after the appeal court judgment.

“Makarfi and I resolved that whatever was the outcome of the appeal court that we will not destroy our party; that once we get the judgment from the court of appeal that, it would be the final judgment for everybody.

“We spoke to all Nigerians about this; it is on record. But all the same, everybody has the right to do what he wants to do. But it is good to place on record that we had an agreement,” he stated.

The South-West Zonal Chairman of the party, Mr. Makanjuola Ogundipe, urged Sheriff to unite the party by seeing himself as a father of all members.

Makanjuola said members of the party from the zone would support him in his desire to reposition the PDP.

“South-West is very settled behind you. This is the beginning of the battle, but you must see yourself as the father of all. Bring everybody on board. You won the battle for all members of the PDP,” he added.

He urged Sheriff to lead the PDP to win the governorship elections in Anambra, Ekiti and Osun states, saying, “Only then can this victory go down well.”

Meanwhile, Makarfi has restated his plan to pursue the case to its logical conclusion.

Makarfi said this in a statement issued by a member of his faction, Dayo Adeyeye.

He said, “They should comply fully with the judgment of the Court of Appeal. The status quo ante May 21, 2016, is the full National Working Committee elected at previous conventions and not the cronies that he singlehandedly appointed and who are parading themselves as officers of the party.

“We remain resolute in our determination to pursue our case to its logical conclusion in the interest of justice and the Nigerian democracy.”