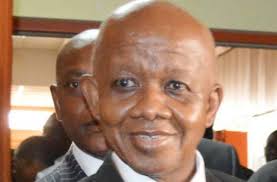 A Senior Advocate of Nigeria, Mr. Joe Agi, who is being prosecuted along with Justice Adeniyi Ademola of a Federal High Court, has told the Department of State Services that a President Muhammadu Buhari’s lawyer paid N500,000 to the judge in 2015.

Agi said Mr. Kola Awodein (SAN) paid the money to Justice Ademola in 2015 at the time the judge was presiding over Buhari’s certificate case.
Agi had claimed to a DSS investigator that the sum of N500,000 paid to Justice Ademola by Awodein was not meant to be a bribe but a gift for the wedding of the judge’s daughter.

This came to the fore on Tuesday when a DSS investigator, Mr. Babatunde Adepoju, was testifying before a High Court of the Federal Capital Territory, Maitama, as the 16th prosecution witness in the ongoing trial of Justice Ademola, his wife, Olabowale and Agi.

Adepoju made the disclosure while being cross-examined by defence lawyers.

Justice Ademola, Olabowale and Agi, are being jointly prosecuted by the Office of the Attorney General of the Federation on charges, including receiving and giving gratification to influence the course of justice.

Among the 18 counts preferred against the defendants, was an allegation that on January 5, 2015, in his capacity as a public servant, Justice Ademola “corruptly received” from Agi a BMW Saloon 320i valued at N8.5m through his son, Ademide Ademola, as gratification in the exercise of his official functions as a judge.

The prosecution also alleged in about five other counts, that Justice Ademola, through his wife, received gratification of N30m in three instalments of N10m each from Agi between March 11 and March 26, 2015.

Under cross-examination on Tuesday, Adepoju confirmed that in the course of investigating the case against the defendants, he interrogated and took the statements of Justice Ademola and Agi only.

The witness also confirmed that Agi had disclosed the information of Awodein’s payment of N500,000 to Justice Ademola to him (Adepoju), in the course of interrogation.

He also confirmed that Agi had explained under interrogation that the N30m he paid into Olabowale’s account was the money contributed by his and Justice Ademola’s mutual friends for the judge’s daughter’s wedding.

The witness, who had concluded his evidence-in-chief on Monday, confirmed under cross-examination that, among those who, like many other friends, sent monetary gifts to Justice Ademola about the time of his daughter’s wedding in 2015 was Awodein.

Awodein used to be a lawyer in the defence team of the then presidential candidate of the All Progressives Congress, Maj. Gen. Muhammadu Buhari (retd.), (now the President), who was faced with a series of suits seeking his disqualification from participating in the March 28, 2015 presidential election for failing to submit his academic certificates to the Independent National Electoral Commission.

Adepoju confirmed that Agi had said under interrogation that while the certificate case filed by one Mr. Chukwunweike Okafor was pending before Justice Ademola, Awodein paid the sum of N500,000 into the judge’s account as gift for the judge’s daughter’s wedding.

Lawyer: In that interview, he (Agi) told you that the wedding gift passed by Ken Hubert and Bassey Nassey was not the only wedding gift.

Lawyer: He (Agi) also told you that Buhari’s lawyer, Mr. President’s lawyer, also passed a gift of N500,000 to the family through him.

Lawyer: The name of the lawyer is Mr. Kola Awodein (SAN).

Lawyer: The third defendant (Agi) further informed you that within the period (before and after the wedding) that Buhari’s certificate case was pending before the first defendant (Justice Ademola).

Lawyer: Was President Buhari’s lawyer paying the money in order to win his case?

Lawyer: To say that it (the money paid by Awodein) was a bribe would be a speculation.

Lawyer: To describe the gifts passed through the third defendant by mutual friends as bribe would be speculative.

When earlier cross-examined by Chief Robert Clarke, Olabowale’s lawyer, the witness agreed that in African culture, it was usual for people to be “showered with gifts” when having any of naming, wedding and funeral ceremonies.

On the BMW car gift, Adepoju confirmed that the judge’s son, Ademide, said under interrogation that Agi was his mentor and that the car was a fulfilment of a long-promised gift from the Senior Advocate of Nigeria.

The witness also admitted that the initial allegations that Justice Ademola received bribe from the immediate-past National Security Adviser, Col. Sambo Dasuki (retd.), as well as from the leader of the Indigenous People of Biafra, Mr. Nnamdi Kanu, for the bail he granted them, were not backed by evidence.

He said he confirmed in the course of investigation that the Federal Government did not oppose either of the two accused persons’ bail applications when heard by Justice Ademola.

The witness also confirmed that a magistrate earlier granted bail to Kanu but the order of bail was not complied with.

He said he was not aware if the magistrate had been put on trial.

On the allegation that the N30m paid to the judge’s wife was probably a bribe for an order of garnishee nisi granted in favour of Agi’s clients for the enforcement of a $3.2bn judgment earlier given by the judge, Adepoju confirmed that, his “initial view of the matter is based on incomplete knowledge.”

The lead prosecuting counsel, Mr. Segun Jegede, announced after the defence lawyers finished cross-examining Adepoju and the witness subsequently re-examined, on Tuesday, that the prosecution had closed its case.

With a total of 19 witnesses, he announced that the prosecution had closed its case.

But the defence lawyers said they would file no-case submission.

The trial judge, Justice Jude Okeke, directed that the defence must file the no-case submission and the prosecution should respond before March 19.

He fixed March 19 for the hearing of the no-case submission.

Share
Previous PDP Crisis: I Did Not Endorse Sheriff- Jonathan
Next CBN Pumps $500m into FX Market, Banks Take up Only $371m