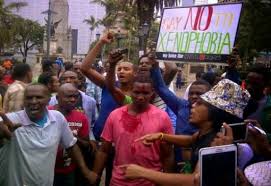 The Nigerian community in South Africa on Monday said some of its members have been receiving fresh threats from some people in their host country.

South Africans have launched xenophobic attacks against Nigerians and other foreign nationals twice in the last one week.

At least five homes and businesses belonging to Nigerians were burned by a mob on Saturday, while 15 houses, either belonging or rented by immigrants, especially Nigerians, were been burnt by angry residents in Rosettenvile, south of Johannesburg, last week Sunday.

“Some Nigerians and other foreign nationals in Pretoria West now live in fear. Some have started packing their belongings for fear of more attacks,” he said.

“They confirmed to the union that some South Africans were calling and threatening to unleash more mayhem against them.

“The callers asked for money to be spared the attacks. The union is worried about the development because the South African police are yet to arrest those who perpetrated last Saturday’s attacks.”

Anyene said the union had pleaded with Nigerians to take precautionary measures and remain law abiding.

He also urged the federal government to persuade its South African counterpart to put in place measures to guarantee the safety of Nigerians.

Earlier on Monday, Abike Dabiri-Erewa, senior special assistant to the president on foreign affairs and the diaspora, had called on the South African government to call its citizens to order.

Dabiri-Erewa said further attacks on Nigerians resident in the country may have dire consequences.

She also called on the African Union (AU) to intervene in the renewed xenophobic attacks.