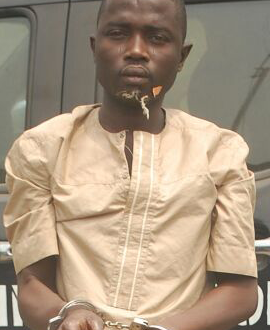 Man murdered and cut his wife into pieces for money ritual

February 21, 2017 Comments Off on Man murdered and cut his wife into pieces for money ritual 523 Views

Lagos State Police Command has arrested a 36-year- old man who allegedly murdered and butchered his wife into pieces for ritual purpose in Ijora.

The suspect , Shakiru Bello, was apprehended in Ibadan, Oyo State, where he had allegedly gone to take cover after the alleged dastardly act in an uncompleted building, on Monday.

According to a report by Vanguard the suspect dismembered the wife’s body with cutlass and buried her in a shallow grave in order not to give himself away, before leaving for Ibadan, his home town. 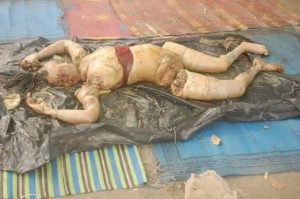 According to shakiru who told the police that he never intended to kill his ex-wife. “I called her on February 13th and she came to see me at home. Later, both of us went to the Island. It was on our way back that a commercial bus hit the bike that we boarded and she fell, hitting her head on the ground.

It was gathered that  the suspect allegedly inserted  some charms into Sherifat’s private part while sleeping in their one room apartment in Shomolu area of the state, a situation that led her to stay away from him for some time. However, on Monday, the deceased was said to have called the husband on phone, demanding N10,000 for the upkeep of their three children. They agreed to meet in Ebute-Metta area, from where they proceeded to Ijora where the alleged act took place. Residents besieged Ijora Police Division after the news of the incident spread. Some of the curious residents followed the police and the suspect to the shallow grave where the corpse of Sherifat was buried and subsequently exhumed. The dismembered body parts, which included the head, two hands and legs, were in decomposing state. The  stench from the exhumed body parts did not deter the anxious crowd from having a glimpse of them. At this point, the crowd called for instant justice on the suspect, appealing to the police to release him for mob action. In order to avoid the invasion of the police station, the suspect and exhibits were taken to the Area ‘B’  Command, Apapa, with some residents still following on motorcycles. During interrogation, the suspect, blamed the incident on the devil. “I don’t know what to say than it was the devil that pushed me into butchering my wife. I am from Ibadan, in Oyo State.We have been married for 14 years now. We have three children. I was at Shomolu when she called me to meet her at Estate bus stop, Ebutte-Metta.  She wanted to collect N10, 000 from me. We later went to Ijora area where I killed her inside an uncompleted building. I killed her on Monday. If I did not bury her, people will easily link me with her death. Yet I have been caught. It was the work of the devil”. The suspect, as gathered, would be transferred to the homicide section of the State Criminal Investigation and Intelligence Department, Yaba.