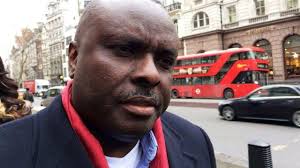 Ibori Was Not Deported From The UK- Aide

February 7, 2017 Comments Off on Ibori Was Not Deported From The UK- Aide 9 Views

A tumultuous crowd welcomed Ibori back to his hometown on Saturday.

He returned after completing his jail term in the UK.

The statement said, “Ibori wishes to correct the impression created by some news reports that he was deported from the UK. Even though I had wanted to publicise my return to Nigeria so that wrong meanings would not be read into the public interest.

“I knew what my presence in Nigeria would elicit, and also because I never wanted any crowd that would gather because of me to disturb a single Nigerian in the course of their duties, all my efforts to keep the trip secret failed. The airline that brought me into Nigeria is public knowledge.

“So, it would be easy to verify that I was not deported because the deporting country’s officials would always hand over deportees to the Nigerian Immigration officials and documents would also be exchanged.

“Those who have chosen to report lies, and claim that I was deported know that no document exists anywhere in the world to back up those malicious claims.”