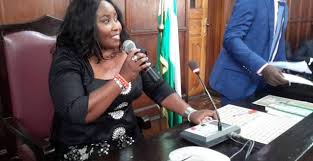 Speaker of the Ondo state house of assembly, Jumoke Akindele was on Friday sacked by her fellow members.

Their removal was carried out by 15 members of the PDP and five members of the All Progressives Congress(APC)
Malachi Coker, a lawmaker representing Ilaje 1 was subsequently elected as acting speaker while Ayodele Arowele was elected his deputy

Share
Previous We Will Protest For Good Governance: 2Baba Clarifies Intents
Next Buhari Receives Amosun, Others In London