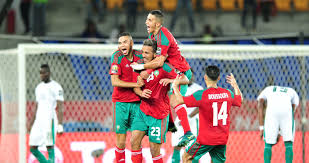 Defending champions Ivory Coast have been knocked out from the on going African Cup of Nations tournament after a 1-0 loss to Morocco on Tuesday night.

The Atlas Lions defeated the African champion in their final Group C match , sealing their progression to Quarterfinals.

Ironically, the Atlas Lions of Morocco is currently been managed by Herve Renard, the man who won the 2015 edition title for Ivory Coast.

Ivory Coast and Togo have now joined the host, Gabon , Algeria, Guinea Bissau , Gabon , Zimbabawe who have been eliminated from the tournament while Morocco, DR Congo , Ghana, Tunisia Senegal , Burkina Faso and Cameroon through to the quarter finals.

Share
Previous Why I Didn’t Graduate From UNN- Adeboye
Next Senate Stands by Resolution Calling for Babachir’s Sack, Agrees to Screen Magu