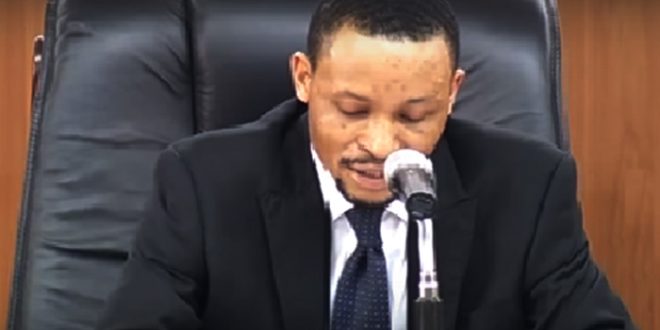 The Civil Society Network Against Corruption (CSNAC), which is a coalition of over 150 anti-corruption organizations, has urged the Economic and Financial Crimes Commission (EFCC), to urgently re-investigate the Chairman Code of Conduct Tribunal (CCT), Mr. Danlami Umar, over alleged case of bribery and abuse of office.

In a petition sent to the anti-graft agency, CSNAC through its national chairman, Mr. Olanrewaju Suraju, said the myriad of witnesses on the alleged issue of bribery and abuse of office from a case between the CCT chair and a retired Comptroller of Customs, Rasheed Taiwo, appears to indicting Umar, hence the need for investigation on the matter.

“Mr. Umar was alleged to have demanded a N10 million bribe from a retired Comptroller of Customs, Rasheed Taiwo, who was at the material prosecuted at the CCT for allegedly failing to declare his asset while in office. The newspaper stated that the retired Comptroller of Customs, Mr. Taiwo had reported the demand to the EFCC and was advised to play along, leading to the payment of N1.8 million to the Chairman of CCT through the latter’s Personal Assistant.

“Premium Times further reported how three staff of the tribunal – the accountant, Shotunde Adeyinka, and two administrative officers, Lucky Eronlan and Johnson Owopetu – who were transferred out of Abuja to Ondo, Bauchi and Katsina states respectively, under controversial circumstances, had petitioned the EFCC on Mr. Umar’s corrupt practices and highhandedness in office. In their petition, the trio were reported to have listed a barrage of corruption allegations, including awarding contracts without due process, making full contract payments to contractors instead of mobilization fees, and dysfunctional appointments and promotion without board approval or regards to federal character.

“Interestingly, the Head of Public Relations of the Code of Conduct Tribunal, Ibraheem Al-hassan, disclosed in April, the details of a letter purportedly from your Commission. Mr. Al-hassan quoted excerpts of the letter as saying, ‘‘We would like to reiterate the Commission’s position in regard to this matter as earlier communicated to you and stated that the allegations leveled against Justice Umar were mere suspicious and consequently insufficient to successfully prosecute the offence.” Mr. Al-hassan said the letter, with reference number EFCC/P/NHRU/688/V.30/99, and dated April 20, 2016, was signed by the secretary to the commission, Emmanuel Aremo.”

CSNAC noted further that, “Meanwhile, contrary to the assertion of this letter, the Leadership newspaper of May 13, 2016 reported officers of your Commission as asserting the culpability of Mr. Umar in the bribery scandal. According to the paper “The Economic and Financial Crimes Commission (EFCC) has insisted that the chairman of the Code of Conduct Tribunal, Danladi Umar, was implicated in a N10 million bribery allegations levelled against him by a retired customs comptroller, Rasheed Taiwo Owolabi”.

“The anti-graft agency told an Abuja High Court that the personal assistant to the CCT chairman, Alli Gambo Abdullahi, named the CCT chairman as the beneficiary of the part payment made by Taiwo in respect of the bribery saga”.

“In its report of proceeding at the trial of Alli Abdullahi before Justice Christiana Orji, Leadership newspaper wrote “the EFCC said the denial made by Abdullahi much later after his first statement of September 9, 2013 was a mere after thought. In his evidence before Justice Orji, an operative with EFCC, Abdulmajeed Ibrahim, who led the investigation into the bribery allegations told the judge that Abdullahi freely made statement on September 2013 to the effect that the CCT boss allegedly asked him to act on his behalf”.

“Testifying further, Abdulmajeed Ibrahim told the court that “the denial made by Abdullahi in another statement cannot invalidate the first statement of 2013 because it was voluntary made by the accused person. The witness, who was led in evidence by EFCC Counsel Andrew Akoja, urged the court to disregard and reject the denial of Abdullahi that he did not give the bribery money to Justice Umar”.

“Another operative of your Commission, Bala Mohammed, according to the Newspaper report, further testified and “told the court how he was invited in 2013 to participate in investigation of a petition of one Rasheed Taiwo Owolabi, concerning a N10 million bribery demand by the CCT boss.

“The witness told Justice Orji that the PA to the CCT boss who is currently standing trial on criminal offences was invited on August 12 2013 and he volunteer a statement to EFCC. Mohammed claimed that Abdullahi was investigated in an open freely hall and that there was no duress, intimidation, harassment or coercion in the cause of the investigation. The witness insisted that the statement of Abdullahi was made on his own volition and that he freely signed before the head of the investigating team counter -signed. Bala also stated that the issue of duress raised by Abdullahi was an after -thought and uncalled for because he (Abdullahi) was granted bails in his own self recognition”.

“Another EFCC Witness, a superintendent of police, Reuben Omosieho corroborated the evidence of other witnesses to the effect that the statement of Abdullahi in the 10 million Naira bribery allegations was freely, voluntarily and fairly made. The witness told the Abuja High Court that there was nothing unusual about Abdullahi when he was brought before him to suggest that the statement was made under duress or under any inducement”.

“Considering the testimonies of your operatives as reported above, CSNAC is demanding your commission’s urgently reinvestigation in this matter and subsequent prosecution of Mr. Danladi Umar where his culpability is established as asserted by your detectives in the trial of Mr. Umar’s Personal Assistant,” CSNAC said.