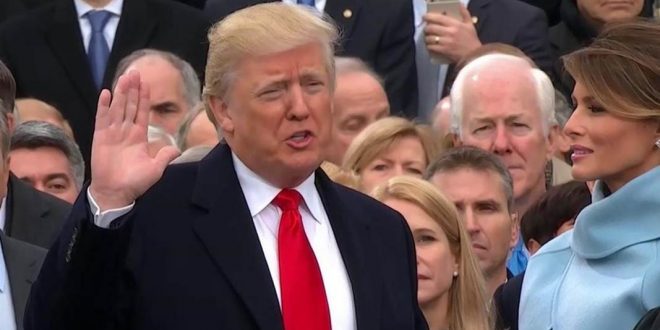 Billionaire Donald Trump has been sworn in as President of the United States of America.

Donald Trump  took over the mantle of leadership as the 45th President of the United States at ceremony that saw Barack Obama end his reign as the 44th president.

On a raised platform on the flag-draped West Front of the Capitol, Trump placed his left hand on one Bible that dates from his childhood and another that belonged to Abraham Lincoln and raised his right hand in the air as he promised to preserve, protect and defend the Constitution.

Under gray skies and in front of a crowd stretching most of the way from the Capitol toward the Washington Monument, Trump took the oath from Chief Justice John Roberts with the new first lady Melania Trump by his side.

Trump revived some of the hardline rhetoric from the campaign during his inaugural address.

“We assembled here today are issuing a new decree to be heard in every city, and in every foreign capital and in every hall of power,” Trump said.

Hillary Clinton, who Trump defeated in the November election, was also in the audience in a show of support for national unity and the peaceful transfer of presidential authority.

The swearing-in was one of many traditions that began unfolding early Friday morning.

Trump and his family attended a private worship service at St. John’s Church, known as the church of presidents.

The Obamas greeted Trump and the new first lady, Melania Trump, at the North Portico of the White House before hosting them for tea.

Earlier in the morning, Barack Obama wrote a letter to Trump and left it on the Resolute Desk in the Oval Office, as outgoing presidents typically do for their successors.

As Obama left the Oval Office for the final time, he was asked if he had any words for the American people. “Thank you,” Obama said.