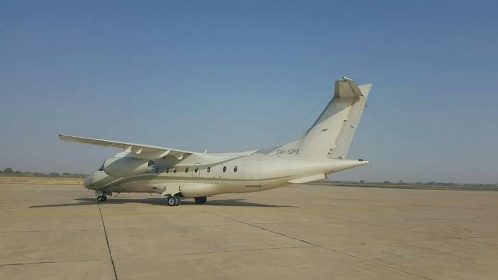 The Economic and Financial Crimes Commission (EFCC) has seizes a N948million aircraft allegedly belonging to the former governor of Borno State Ali Modu Sheriff who is under investigation.

According to a report by The Nation, the aircraft was seized on Monday at the Maiduguri International Airport.

Anti-graft agencies have also placed two other private jets under surveillance at the Nnamdi Azikiwe International Airport in Abuja.

The grounding of the three aircraft is part of the ongoing investigation which traced some looted funds by some former political office holders to the purchase of private jets.

It was learnt that a Dornier aircraft 328 linked with the former governor had been earlier impounded, but it resumed operations without EFCC’s clearance.

Upon sighting the aircraft in Maiduguri on Monday, after months of watch-listing, EFCC detectives swooped on the crew and seized it.

Detectives have interrogated the suspected beneficial owner of the jet, Mr. Samuel Ayodele, the Managing Director of Skybird.

A “beneficial owner” is a legal term where specific property rights (“use and title”) in equity belong to a person even though the legal title of the property belongs to another person.

“Our detectives are working on clues that the aircraft belongs to a former governor of Borno State but it is being used by a front. We are already looking into relevant records; we want to establish who actually owns it.

“We are tracking how and when the aircraft was bought, where it was purchased, the mode of payment and the sources of funds.  This is definitely an international transaction; it is easier to trace the inflows and outflows from any account.”

“There are also some petitions containing allegations against the former governor concerning the aircraft and some public funds. If the aircraft cannot be identified with the ex-governor, the EFCC will release it to the beneficial owner.”

Ayodele is said to have told detectives that the aircraft was originally with the defunct IRS Airlines, which bought it with a loan of about N948million from a bank.

The source quoted Ayodele as saying: “I bought the liability from the bank and took over the aircraft because IRS was not able to pay back the loan.

“It is a clean business. Since I graduated from school, I have been working in the aviation sector.”

Two other jets, suspected to belong to some former political office holders, have been placed on surveillance at the Nnamdi Azikiwe International Airport.

“The movement of the jets is presently restricted until the conclusion of our ongoing probe. All relevant agencies in the aviation industry are collaborating with us on these two jets. We are working on information made available to EFCC that they were bought with looted funds,” a source said.

On the identities of the owners of the jets, the source said they would not be disclosed until the EFCC has made substantial progress in their investigation.