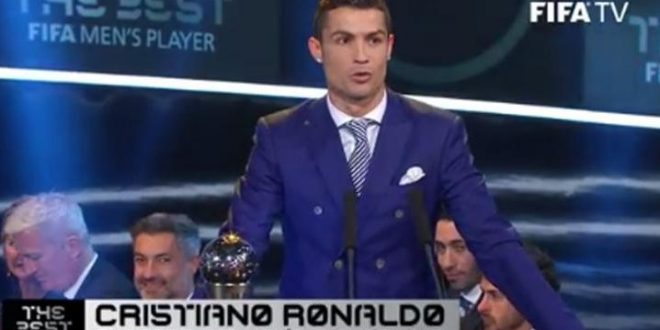 Cristiano Ronaldo was named FIFA’s Best Men’s Player for 2016 on Monday night, beating Lionel Messi and Antoine Griezmann on the three-man shortlist to claim the prize in Zurich.

Ronaldo, who picked up his fourth Ballon d’Or in December, also landed the first separate FIFA prize since world football’s governing body and France Football announced in September that they would be presenting two separate awards.

FIFA’s Best Men’s Player award is voted for by each of FIFA’s 211 nations comprising the national team captain, manager, a journalist from every FIFA nation, and fans registered on FIFA.com — each group holding 25 percent of electoral weight — for a player’s performances from Nov. 20, 2015 to Nov. 22, 2016.

Five-time Ballon d’Or winner Messi shone as Barca won the 2015-16 La Liga title, but the Argentina international was upstaged this year by Ronaldo, who won both the UEFA Champions League with Real Madrid and Euro 2016 with Portugal in a stunning year.

Ronaldo scored 61 goals and registered 20 assists in 60 games for club and country during voting period (48 goals in 47 games for Real Madrid; 13 in 13 games for Portugal), while Messi netted 59 goals, 34 assists in 64 games (51 goals in 53 games for Barcelona; eight in 11 games for Argentina) and lost in the Copa America final to Chile.

Despite France striker Griezmann finishing as Euro 2016 top scorer, he finished third for the trophy having scored 41 goals and bagged 13 assists in 69 games (33 goals in 54 games for Atletico Madrid; eight in 15 games for France.)