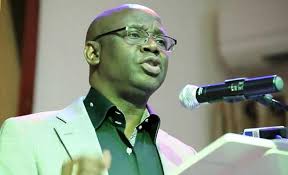 The senior pastor of the Latter Rain Assembly, Tunde Bakare has called on President Muhammad Buhari to rejig his cabinet and restructure the country.

Bakare who made the comments during a church service, in which he delivered a state of the nation address said wicked people in this administration must be shown the way out.

“May 29 this year will mark two full years of this administration in government. We have no more time to waste. Mr. President must galvanize his team to get the job done,” Bakare said.

“Square pegs in round holes must be removed or put in appropriate places; the wicked who surround the righteous must be led away from the presence of the king.

“Those who cannot stand the heat must get out of the kitchen. It is time to demonstrate leadership, wise judgment and astute public policy that guarantees stable and prosperous nationhood upon a foundation of peace; it is time to build a well-ordered nation with strong institutions dispensing justice.

“It is time to arise with patriotic zeal to build a great 28 nation such that, years from now, generations yet unborn will look back at their history, not with disdain, but with gratitude to God that our generation preceded theirs.”

Furthermore, he spoke on the need to reduce the 36 states to 6 geopoltiical zones, a move he believes would make the states healthier and financially robust.

He spoke on the need to reduce the 36 states of the federation, into the 6 geo-political zones; a move he believes would make the states healthier and more financially robust.

Share
Previous When I saw Funke, It Was Love At First Sight – JJC Skillz
Next Former Niger State Governor Kure Dies At 57