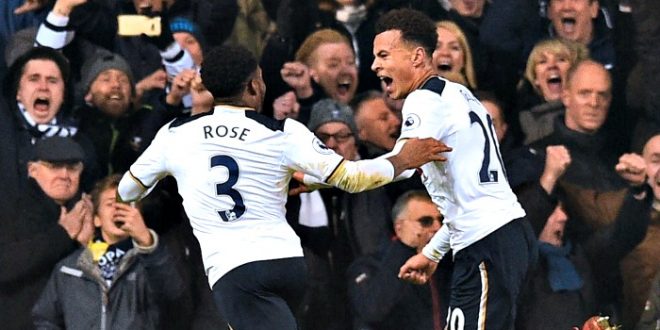 Chelsea were bidding to become the only English side ever to win 14 successive top-flight matches in a single season but a pair of Alli headers either side of half-time consigned the Blues to a 2-0 defeat and their first league loss since September 24.

The result means Chelsea miss the chance to move eight points clear at the top of the table while Tottenham climb to third, seven points behind the league leaders.

Chelsea have looked almost unbeatable at times during their relentless winning streak, which has included beating Manchester City, Tottenham in the reverse fixture in November, and Manchester United.

But Antonio Conte’s men ran into a Spurs side in supreme form themselves – they have now won five in succession in the league and seven out of their last eight in all competitions.

Central to their resurgence has been the return of key players to both fitness and form, not least Alli, whose third consecutive brace means he now has seven goals in four games, meaning he is back in the same groove that helped drive Tottenham’s surprise title challenge last term.

For Chelsea, their record pursuit bursting may yet prove a blessing in disguise – but this loss comes as a timely reality check, particularly with crucial games against Arsenal and Liverpool fast approaching.

Mousa Dembele, rested against Watford on New Year’s Day, returned to the starting line-up along with Kyle Walker and Jan Vertonghen, both available again after suspension.

Conte, meanwhile, plumped for Pedro – also back from a ban – ahead of Willian, despite the Brazilian scoring twice in last weekend’s 4-2 win against Stoke, while Nemanja Matic took the place of Cesc Fabregas in midfield.

An early tussle between Victor Wanyama and N’Golo Kante, the team’s respective midfield destroyers, set the tone before Cesar Azpilicueta barged into Vertonghen, clearly feeling the defender had overstayed his welcome in a tangle on the floor with Pedro.

In between, some football was played and Chelsea could have taken the lead when Matic’s long ball forward found Eden Hazard in space, but the Belgian needlessly rushed into a half-volley and his finish trickled wide.

Tottenham were fired up, stronger, faster and more aggressive when the ball spilled loose, which it did frequently as neither side demonstrated the sort of precision needed to break through in the final third.

After another attempted pass drifted astray, Diego Costa sounded off at team-mate Pedro for apparently making the wrong run, which prompted Pedro in turn to berate Costa, all very much to the delight of Tottenham’s supporters.

Christian Eriksen drove narrowly wide from distance and Eric Dier’s header at the back post had to be palmed away by Thibaut Courtois – but it was not until stoppage time at the end of the half that the deadlock was broken.

Eriksen and Alli, quiet for much of the half, combined, the former lifting a cross to the back post where the latter – who had sneaked between Victor Moses and Azpilicueta – looped a header perfectly over Courtois.

It was the last notable action of the half and when Chelsea reemerged they looked reinvigorated, Costa testing Hugo Lloris with a fizzing shot and then Hazard somehow nodding wide from five yards when the goal was at his mercy.

If the visitors had planned an onslaught, however, their momentum was quickly halted as Alli, in a carbon copy of his opener, again eluded Moses and Azpilicueta at the back post and again headed home Eriksen’s cross to double Tottenham’s lead.

Chelsea enjoyed a sustained spell of possession after the hour but they never really threatened a comeback, despite the introductions of both Willian and Fabregas off the bench.

Matic was lucky not to escape further punishment late on for a high tackle on Alli, who had to leave the field as a result.

The 20-year-old was given a standing ovation as he hobbled off and Tottenham’s fans were still singing his name at the final whistle.