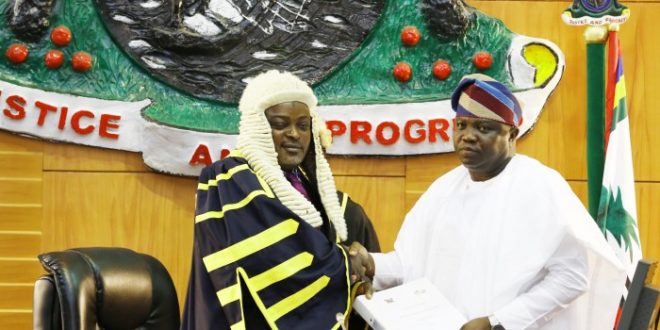 The Lagos State House of Assembly on Tuesday passed the state’s 2017 Appropriation bill of N812.998 billion.

The passage followed the adoption of the report and recommendations of the House Committee on Budget and Economic Planning, headed by Mr Rotimi Olowo.

Olowo, while presenting the committee report, said that the state was able to achieve 71 per cent budget performance in 2016 in spite of the economic recession in the country.

The lawmaker said that the state would embark on progressive taxation which would bring more people into the tax net and make the rich pay more.

As part of the committee recommendations, the lawmaker said there was a need to comply with the Appropriation (Amendment) (Re-ordering) Law, 2016 to release funds to relevant MDAs.

The lawmaker added that there was a need for the Ministry of Economic Planning and Budget to carry out a budget review of the 2015-2017 Medium Term Expenditure Framework (MTEF) of MDAs before allocating envelopes for Y2018 proposed budget estimate.

He said that this would guide against duplication of expenditure (Capital and Recurrent) by MDAs.

Among the highlights of the approved 2017 budget is the increase in the Capital Expenditure of Lagos State Independent Electoral Commission from N2.5 billion to N3 billion to cater for election matters.

On the other hand, overhead for Security/Emergency Interventions was reduced from N500 million to N400 million.

Among other things, N1 billion was allocated as capital expenditure for the Ministry of Special Duties and Inter governmental Relations.

The Assembly approved the sum of N20.43 billion for LAMATA as capital expenditure and N2 billion for Ferry Services.

However, overhead cost of Lagos State House of Assembly Service Commission was increased from N210 million to N252 million.

The House also approved N10 billion for the State Infrastructure Intervention Fund, while it approved N159.55 million for state Electricity Board.

The Speaker of the House, Mr Mudashiru Obasa, commended Olowo and members of the committee for its thorough scrutiny of the budget within a short time frame.

Obasa directed the Acting Clerk, Mr Azeez Sanni to send a clean copy of the bill to Gov. Akinwnmi Ambode for his assent.

The House adjourned its plenary till Jan. 5.

The News Agency of Nigeria (NAN) reports that Ambode had, on Nov. 29, 2016, presented the Appropriation Bill to the lawmakers for approval.

The House had, on Dec. 1, 2016, after receiving the budget, directed all its standing committees to invite all Ministries, Departments and Agencies to defend their budgets.

Share
Previous THE MORE THINGS CHANGE, THE MORE THEY ARE THE SAME
Next Abuja Airport Now To Be Shut From March 8