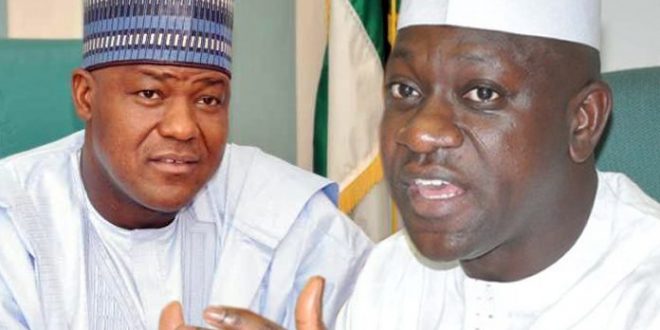 Suspended member of the House of Representatives, Abdulmumin Jibrin, has accused the Speaker, Yakubu Dogara, of collecting $600,000 from James Ibori.

Jibrin, a former Chairman, House Committee on Appropriation, claimed on Saturday that Ibori donated the money to Dogara’s campaign from prison in 2015 to support his bid to become the speaker.

The suspended lawmaker claimed in a statement that he chose to be silent lately to strategise on his crusade in the new year.
The statement read in part, “The propaganda and lies spread around lately by the axis of evil in the House of Representatives to water down my popularity shows how desperate Dogara has become. It is such a shame that Dogara denied that former governor James Ibori provided huge support to his emergence as speaker by mobilising members from Delta State and others from the South-South and South-East zones to support him.

“Since he has disowned Ibori, he should at least have the honour to return the $600,000 Ibori donated to his speakership campaign. I am sure he cannot deny the fact that he collected that money in cash.”

However, when contacted, the Special Adviser to Dogara on Media and Public Affairs, Turaki Hassan, referred our correspondent to an earlier statement that denied such allegation.

SUNDAY PUNCH’s findings indicated that Jibrin might have returned to the trenches after a reported move to broker peace between him and Dogara collapsed.

Jibrin was reported to have engaged some lawmakers to broker the peace.

As part of the efforts, he was reportedly advised to send a congratulatory message to Dogara who turned 49 recently.

In the message, Jibrin wished Dogara “Many prosperous years ahead; God’s guidance and abundant blessings.”

It was gathered that the Kano lawmaker did not receive any positive reaction from the Speaker’s camp after the message.