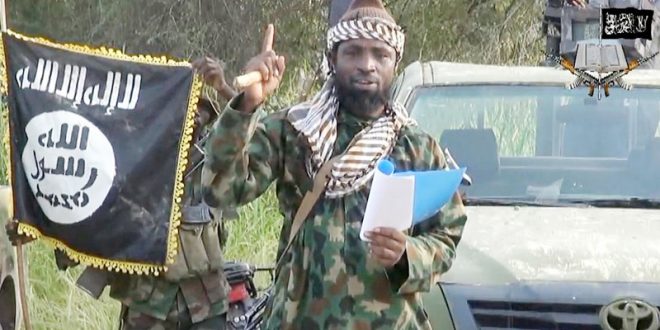 The Nigerian Army said it had recovered Abubakar Shekau’s Qur’an and flag in Camp Zero, the Boko Haram’s Headquarters in Sambisa forest. The Army also said it arrested about 1,240 suspected Boko Haram terrorists during a mop-up operation by troops inside the Sambisa forest.
Maj.-Gen. Lucky Irabor, the Theatre Commander of Operation Lafiya Dole, disclosed this while giving newsmen update on “Operation Rescue Final” in Maiduguri. “We believe that the Holy Book and the flag were abandoned by Abubakar Shekau while he escaped.
“The Book will be taken to the Chief of Army Staff, Lt.-Gen. Tukur Burutai, for onward presentation to Mr President. “We have also made a lot of arrests. Our troops in Damboa arrested about 15 Boko Haram members. We also arrested one Musa from Potiskum on Christmas day which was Dec.25.
“On Dec. 26 our troops also intercepted two Boko Haram suspects in Maiduguri.
“We, therefore, warn residents of the state to be wary of people coming to hide in and around their houses.
“We are also warning residents to report any suspected Boko Haram members hiding in their houses to relevant security agencies. Any failure to do that would tantamount to supporting and sympathising with the sect’s activities,” Irabor said.
The Army said it arrested about 1,240 suspected Boko Haram terrorists during a mop-up operation by troops inside the Sambisa forest.
413 of the suspects were adults; 323, female adults; 251, male children; and 253 female children. He said the suspects were apprehended during a mop-up operation against the sect members in the forest.
“We are interrogating them to know whether they are Boko Haram members, because there is no way somebody that is not their member would live inside Sambisa forest.
“We are still on the trail of the terrorists and I want to assure you that all escape routes have been blocked. Within this period, also, about 30 fleeing suspected Boko Haram members have surrendered to the Niger Multinational Troops on the shores of the lake Chad and we learnt that they were taken to Difa in the Niger Republic.
“The suspects include; 24 male and six females.
“We would like to use this opportunity to encourage the terrorists to give up the fight because the window is still open,” the commander said.